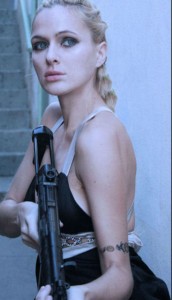 Born in Poland and raised in Canada, Dominika Juillet in the last several years has emerged as a top B Movie actress.  Some of her films are,  “Seattle Superstorm,” “Dragon Wasps,” “Sink Hole,” Dracano,” and most recently “Stonados.”   With several films in pre and post production, we’ll be seeing plenty more of Dominika’s work in the near future.

In addition to acting, Dominika is a writer.  She both wrote and starred in, “Under the Cover,” the BravoFact video “Sex and Drinking,” and Sean Hogan’s “Walk the Talk” music video.

How did you get your start in B Movies?

DOMINIKA: I was on set actually, visiting because Jason invited me and Rosanna Arquette approached me and asked me what role I was playing. I said (pretty close to a quote)” why would I want to be a film actor? All the film actors are neurotic and do lots of drugs”… *at this point never having done ANYTHING in film, and not really knowing her that well, I kind of had no censorship barrier. She laughed and talked to the director about writing me in a role “that face should be in front of a camera”… She also was amazing to watch working, she was kind to the crew and incredibly immersed in characterization so inspiring for me. After that, I started booking guest stars and just things started falling into place. I never had to do the extras climb.. but I really make a point when I’m a lead or supporting to go and talk to the actors who do have to do that.

Is it true as an actress that you really enjoy using different types of weapons when filming?

Directors Jason Bourque and Scott Wheeler highly praise working with you.  You bring a lot energy to the set.  Is that a Polish trait you carry?

DOMINIKA: I don’t know if it’s Polish or Canadian or my theory that I’m a displaced Italian (Thanks for the compliment J and S btw).. I love the work and I think that shows and is contagious. And I love the process… when I watch a film I did, what triggers in me are the memories of “oh yes, that’s the day the cow ran after me while we were at lunch”.. etc. Both Jason and Scott are very chilled out too, they are really absorbed in the story when they work.. and I’m like that too. I would rather spend less time in hair and make up and more time on set doing variations, exploring the scene.

Can you tell us a little about your devotion to the environment and animals?

DOMINIKA: I have marine biologist parents; the life cycle of the salmon was how I learned to tell seasons… This permeated my very awareness of water usage, the non-human ecosystem and how we directly affect the survival of another organism. I love lions, wolves and horses and feel some strange connection to giraffes. I grew up with a german shepherd/wolf who I thought was my “brother” and I feel that most humans gain a sense of self-awareness and learn to appreciate introspective thinking when spending time with any animal.

Do you see yourself writing or directing a B  Movie in the near future?

DOMINIKA: A B movie action feature is in the works with Jason… it’s a girl version of “taken”… called Disarm. We shot a trailer and as per the CBC series I wrote/starred in, there’s a key role for me in an ensemble cast. I hope I finally get to work with Mark Decascos and Grace Park on this too (we have been talking about doing something together) and this would be set in Belize and open with a Victorias Secret style bikini shoot. And of course,it’s me.. you can anticipate a hot girl with a weapon in the story.. or two. 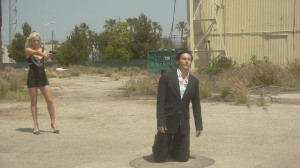 To see more of Dominika check out her website with reels and keep current with her on her IMDB. 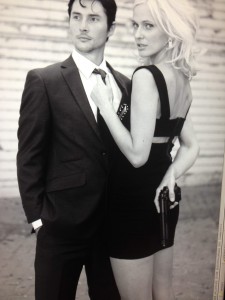 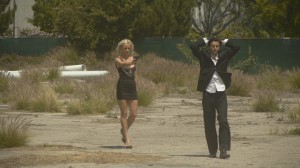