James Cullen Bressack wrote and directed the brutally powerful films (if I can say it that way) “To Jennifer”, “Hate Crime”, “My Pure Joy”, and “13/13/13” along with many shorts and has several upcoming projects in the works.

His father is a three time Emmy Award winning writer for “Pinky & The Brain” and “Animaniacs”.  His mother is the voice of many cartoon characters.   Family is James’ priority and he was by his father’s side when his father was very ill for several years.

With a hell of a creative mind, James has used his life experiences to create some of his films.  After watching the films you may wonder what the hell happened to him.  Don’t question that, a writer’s mind is a very volatile one!

Your parents are in show business and you grew up constantly making your own shorts. When you made your first feature length film, how was that overall experience?

JAMES: My first feature film, My Pure Joy, I often refer to as my own film school. I learned so much from the process of making that film that I feel like it has helped me grow since then. I honestly did alot of things wrong on that film, but we learn from our mistakes I guess. It definitely was the most difficult film for me to make, but since then everything has been smooth sailing. I guess if I could get out of that one alive, I could get my film finished 🙂

The concept for “To Jennifer” came about from a bad break up. When you wrote the script, how much of your emotions went into it?

JAMES: All of my emotions went into it. When I am writing a movie, or even making one, I pour all of the emotions I have on the subject matter into the film, then by the time the movie is done, I no longer have those feelings inside of me but I have them on film. I use filmmaking as my therapy. I rid myself of negative energy and emotion through my movies so I don’t have to feel them anymore. My films help me move on. It was a perfect fit for a breakup I guess, haha 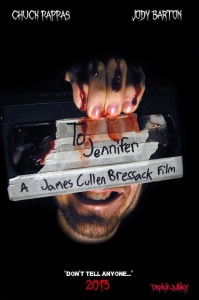 “Hate Crime” has strong disturbing content. Did any cast or crew struggle at times while filming or during auditions?

JAMES: While making the film, I couldn’t have asked for a more supportive, talented, understanding and dedicated crew. No one took any issue with content and really dedicated their lives to the film during the shoot 110%. But during the audition process there were a lot of walk outs and commotion. People took a lot of issue with the content. That’s when you know you have something special.

Just out of curiosity. How do any discussions about writing go with you and your father since you write powerful horror/thriller and he wrote many cartoons including “The Smurfs”?

JAMES: My father has been a major resource while I write. I always talk with him about what I am writing, as he does with me, and we bounce ideas off of each other. I think it’s great, it’s like I have the cheat codes filmmaking at my fingertips, because I have someone who has been through the trenches so many times at my fingertips anytime I need advice. I don’t think I would have become as strong of a writer without him.

Thanks James!  “To Jennifer” and “13/13/13” are due out soon.  In the meantime, check out James Facebook fan page to keep current on his projects and follow him on Twitter.