“Ghost Shark” will be airing on SYFY on August 22nd.  http://www.syfy.com/movies/ghost_shark

Last Fourth of July, teenager Christy Bruce disappeared from a high school beach party. Her severed arm washed ashore a day later. Drunken sea captain Blaise Shaw became a hero to the small seaside community of Harmony after killing the great white shark that was deemed responsible, but the Christy Bruce murder was no shark attack. Blaise turns to ghost hunter Ava Conte, who is skeptical but intrigued by his ghost shark ramblings. With preparations for a massive July 4th celebration rapidly approaching, they soon find themselves embroiled in a conspiracy of sex and murder involving the town’s wealthiest and most powerful citizens. Unprepared to contend with a Ghost Shark that can hunt on land, sea, as well as anywhere there is enough water or rain to sustain its phantom form, Blaise and Ava must uncover the truth about the towns dark past or fall victim to the Ghost Shark.

Griff is not the only family member in films.  His brother Nathan has composed dozens of films including Griff’s “Mask Maker” and “Lake Placid 3.”  Additionally, his father has been in many films including “Animal House.”  In fact, his parents shared a scene together.

“Arachnoquake” had some funny whacky scenes (ex: softball team fighting spiders). Will be there as much or more insanity in “Ghost Shark”? The title would indicate so.

GRIFF: The whole premise of Ghost Shark, and the death scenes in particular, are utterly ridiculous, but the tone is much different the Arachnoquake. Arachnoquake is basically a Godzilla movie and we played it for camp all the way. We even used Atari sound FX to really hammer the point home. The actors almost literally wink at the camera at times. In Ghost Shark, we went for the opposite. We ran the screenplay through the ringer; we even hired an Emmy award winning writers to participate in the process. The actors and I worked hard to make sure we were playing the reality of this extraordinary uncanny situation. The tone of the movie is much closer to the shark movie I directed in 2010 for Syfy, Swamp Shark. In fact, we approached Ghost Shark as if it were the unofficial sequel to Swamp Shark. 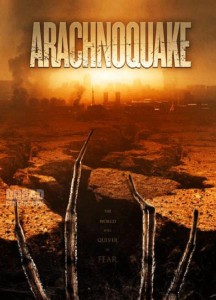 “30 Days to Dies,” “Mask Maker,” and “Ghost Shark” are written and directed by you. What’s the differences you experience directing movies written by you compared to written by someone else?

GRIFF: The directorial experience isn’t all that different. Part of the director’s job is to make sure the screenplay is up to par before principal photography begins, so I try to do as much polishing of the screenplay as time and budget will allow before we journey into principal photography. If I’m the credited writer on the film, it simply suggests that the idea originated with me, or the amount of writing done by myself was equal to or greater than 50% of what appears in the finished screenplay. I would much rather direct a screenplay written by a writer I admire, such as I did on the most recent film I directed entitled, Starve, but the great benefit of directing a piece that I have written is that the movie is essentially storyboarded in my mind before preproduction even begins.

B Movies don’t have the million dollar budgets. How challenging is it to write knowing when you direct it that you’ll have limited resources and budget?

GRIFF: During the writing process we don’t worry too much about how we’re going to pull it off. We’ve done enough of these things to know that if there is a will there’s a way and we let the script be as action packed as possible then we worry about the logistics of how to shoot what we’ve written later. Directing at this budget is a unique challenge. When time and money is abundant, it’s easy to determine how to shoot any sequence, no matter how big, as you have the resources to back you up. Your imagination is the limit. With little money and less time a whole other factor is added to the equation and I will frequently find myself consulting with my AD and DP. In these conversations we usually spend 5 minutes discussing how we would like to execute a particular shot or sequence, then we realize we don’t have the time or money to do so and reluctantly move on to how we’re actually going to shoot the sequence. It’s like trying to climb Mount Everest in sandals, you know you won’t make it up to the top, but you’ll try your damnedest to get there. I think the impossibility of achieving what is scripted is partially what gives these movies their charm and a challenge that anyone who has ever directed a B-movie has experienced first hand. 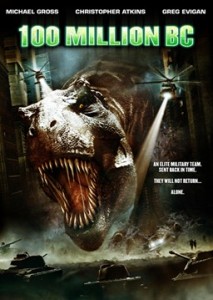 You acted in several Asylum films and then began directing them.  How did you get that opportunity and how was it?

GRIFF: I got the opportunity by simply asking for it…. well, sort of. I had directed a short film that did well in the LA film festival when I was 21 years old. The following year, I was acting in my first Asylum film, the producer of that film (David Latt) and I, kind of hit it off and with arrogant charm I said “you know, you should really let me direct one of these things”. 6 months later he called and offered me the opportunity. 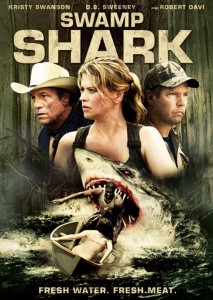 Is acting between directing your way to clear your mind from the stressful directing job?

GRIFF: I wouldn’t say I use it as a way to clear my mind, but that is certainly a side effect of returning to that side of camera. I love acting, not necessarily because it is easier (and some people would argue that it’s not) but it is far less time consuming. There is something amazingly refreshing about being able to focus on one character, light it up when the director says action, then go home to your family after work and not have to stress about making sure every detail is ready for the next day, not to mention post production.

Thank you Griff!  Be sure to connect on Facebook
and Twitter with Active Entertainment for news and upcoming films by Griff.