“A Jewish family, that just arrived in a new neighborhood, are recording their youngest son’s birthday celebrations on video when their home is suddenly invaded by a bunch of crystal-meth-crazed Neo-Nazi lunatics. 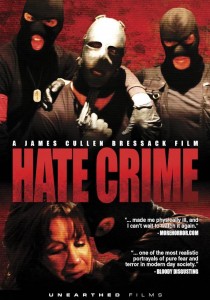 Got a cup of coffee in the morning and started up HATE CRIME.  I watched it and didn’t take one sip of my coffee. It grabs your sick interest from start to finish.”

James did a great job with all the action and thrilling moments in one location, which is very challenging.   The attackers will anger you, but sadly some of the smart ass comments that come out of their mouths are a little comical.   Unfortunately, after I giggled I felt guilty.  Especially since this film is highly possible as there’s many incidents of this ruthless Neo Nazi group committing heinous crimes.  In the film, right off the bat they commit some shocking acts.

Their actions indicate they must be on something and later it’s exposed what’s adding to their psychoses.  The family truly act scared and I’m sure feeding off One, Two, and Three made it easier for them. 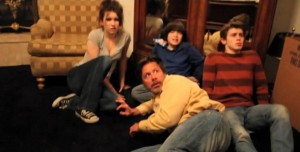 Bathroom scene being a father made me upset….okay a lot was upsetting but that was a moment of less anger and true psychotic moment. Fortunately the daughter could…well you need to watch it.

In addition to the horror, the film shows how psychopaths are emotionally unstable and when something doesn’t go their way, they struggle to handle it.

To summarize, there’s a long list of upsetting moments in this film and the reality aspect of it makes it worse.  In terms of shocking the audience, HATE CRIME accomplishes that. A found footage road trip with plenty of arguing, hookers, drugs, a transvestite, comedy, panic attack, and watching a crazed ex-boyfriend wanting revenge on his cheating girlfriend…so he thinks.  Some things unravel at the end, but not in an overzealous way. After a moment you’ll be thinking, so wait he, so how did, oh man!  This is why watching TO JENNIFER a couple times is worth it.  Plus, producer, writer, director, and editor James Cullen Bressack entertains us playing the role of Steven.  Friends on a road trip all have their own personalities that can and will clash, but Steven always somehow made a bad situation comical with his sarcasm.

Joey suspects his girlfriend of two years, Jennifer, is cheating on him. He is so convinced that he enlists the help of his cousin Steven to create a Video Diary of his attempt to catch her in the act as well as to document the heartbreak she is putting him through. In an attempt to make her feel guilty, he intends to give the tape to her after catching her n the act.

You’ll probably be able to relate some of your friends with the characters in the film.  I felt like I was watching one of my friend’s video from college.   Except instead of IPhones, we had a video cameras that would rest on your shoulder. TO JENNIFER was actually believable, the mishaps, insulting and mocking each other, having fun and their commitment to helping a friend when their girlfriend cheats on them.  As the film moves along, Joey’s obsession and anger grows.  We learn early by his panic attack on the plane that he’s a little unstable.  Therefore, his outbursts and reactions are believable, but not exaggerated too much. 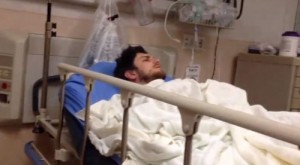 * I’m going to Google “how to hack Facebook” just like Joey did.  It sounds so much easier to find out if your girlfriend is cheating on you than a stakeout.

* Exciting to see Maria Olsen as Joey’s caring, worried mother.  In that scene the Skype window wasn’t maximized, so we see Joey’s Google search of “How to hack Facebook,”  James I have a few questions for you.

3) Who is that set as your wallpaper?

* Prostitute scene.  “Turn the camera off again and I’ll dick slap you…or I’ll have her dick slap you” as camera pans over to the transvestite.

* “He tried to get me to sleep with a transvestite prostitute’” “ha-ha, classic Martin”

The ending was good because when he finally confronts Jennifer (played by the talented Jessica Cameron), it was a little different than I anticipated and we find out Joey’s more messed up than we thought! 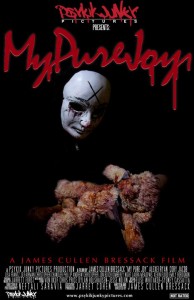 On the outside Adam appears to be a normal teenager, but underneath…his mind has been so rotted by trauma from his past and the gory films he watches, that he has blurred the lines between reality and pretend! This prompts Adam to start killing people in similar ways to films he watches, making sure to put his own little spin on it.

MY PURE JOY in one word….demented, insane, twisted, cruel, brutal, and maddening.  Is there one word to describe all of those and then some?

This is the type of B movie I can watch multiple times because I know a lot was poured into the film and anyone’s first feature film deserves extra appreciation.   I felt like I was watching a combination of SCREAM and A CLOCKWORK ORANGE.  As Adam states in the movie, the murders were ITCHI THE KILLER style.  I was not familiar with ITCHI THE KILLER and had to Google it.  ITCHI THE KILLER is a Japanese film that has been banned in several countries due to its high impact violence and graphic depictions of cruelty.   It must have been a huge inspiration for MY PURE JOY, because it contained some disgustingly awesome scenes and the way it was done was a bit trippy.

The film has a lot of dialogue, but it was funny and easy to listen to.   There are flashbacks to Adam and his father watching slasher films while his father was sick in bed.  Adam’s father told Adam that the only way you can get through people is by fear.  Something Adam took seriously.  Interesting enough is that James watched endless movies with his father years ago when his father was sick.  How much inspiration from James father went into MY PURE JOY? 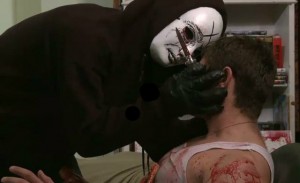 As the movie moves along, the killings occur more often and are equally brutal.  Adam’s relationship with his mom cracked me up.  He will go off on her and cuss at her and threaten her, but she’s rather casual about it.  Personally I could never swear at my mother, so I think that’s what made it funny to me.  Especially after Adam overflows the bathtub and is cleaning up the mess.  His mom sees a knife on him and after he tells her that he’ll put the knife in her juggler, she just says he shouldn’t talk to her that way and tells him to throw the towels into the dryer when he’s done.

Near the end, we meet Adam’s brother who disappeared for a decade.  (Somewhat Spoiler Alert) He discovers Adam is the serial killer and has a difficult time convincing the mother.  Eventually the mother is convinced and they confront Adam.  I wasn’t sure how it would end.  Watch it!

MY PURE JOY is a film that you’ll enjoy…purely….if you have a good sense of humor and enjoy trippy serial killer movies.