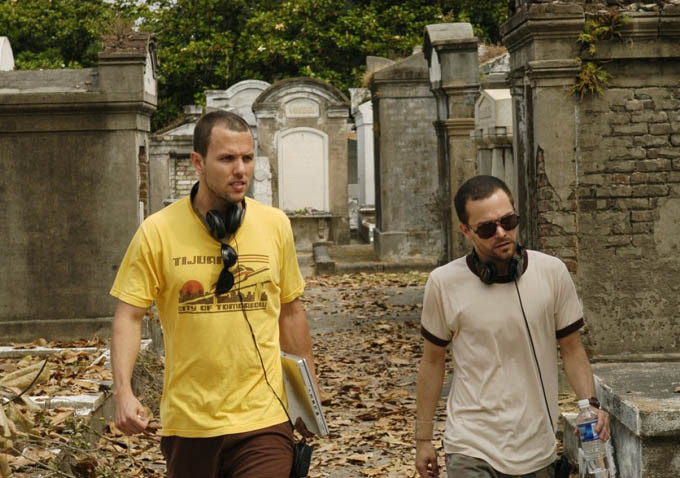 In an event that no one saw coming, last weekend, the micro-budgeted found footage horror film “The Devil Inside,” managed to scare up $34 million and displace “Mission: Impossible – Ghost Protocol” from the top of the box office heap. We got a chance this week to chat with director William Brent Bell and writer Matthew Peterman and they told us what it was like to be behind a huge smash, what’s coming next, and what people think about that controversial ending (which led to the film’s CinemaScore being a dismal F).

We of course had to first congratulate them on their huge-ass opening weekend, which is even more impressive when you consider the film, with no stars and very little production value, was picked up by Paramount for around $1 million — a number it outgrossed on its opening night alone. “It was pretty crazy. It was an ongoing reaction because we knew the movie was not going to completely lose money but every twelve hours there would be another estimated box office and it kept getting bigger and bigger,” Bell said. “It was pretty amazing – to get the film out there and have people talking about it. It was great.” Peterman added: “We made this film independently over two years and we never imagined anything happening like this, in any scenario.”

In the days since the opening numbers came through for “The Devil Inside,” a couple of projects have been announced for the duo, but they say that they were always working on stuff, and that they weren’t consciously developing things with the idea that their horror film would be a smash hit. “We’ve been in this business for ten years, writing scripts and making movies,” Peterman said. “So we had a lot of projects in the pipeline, which were waiting to get going. And a lot of the projects got going when people in the industry became fans of the movie. We had them set up when people had seen versions of the film a while ago. And the fact that it blew up like it did was just the icing on the cake.”

But make no mistake — there are projects on the way. “One is at Warner Bros. and it’s going to be their first foray into this micro-budget space, so we’ll see how that goes, and it’s called ‘The Vatican,’ ” Bell told us about the recently-announced project. The other project that the pair are working on is an untitled horror project that was announced earlier that day. Bell described it, “We’re going back to Eastern Europe to shoot it and it’s set in France. It explores mythology that we’re all familiar with but does it in a way we’ve never seen before. We’re going to shoot it no later than April.”

And, of course, as we closed our conversation we had to talk about the ending of “The Devil Inside,” a conclusion that comes on swiftly and then lingers as the film suggests you go to a website to find out more about the story. The polarized finale led to reports of audiences booing, shouting, and throwing things at the screen. “We stand behind the ending,” Peterman said. “We tried to make a realistic film and sometimes life doesn’t follow a three-act structure. And we all kind of love this abrupt nature of the ending. The website, which is kind of the second part, was brought up pretty late in the game by Paramount, with an interactive component between the film and the website, which has never been done before.” He then took a more Zen approach: “Some fans like it, some fans don’t. It’s just one of those things.”

But for those who crave a little more to the story. “You’ll probably see something on the DVD, absolutely,” Bell said. “It’s pretty wild.”

“The Devil Inside” is in theaters now.