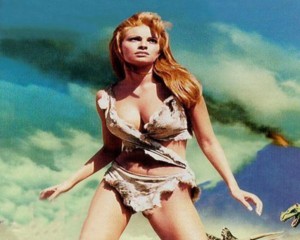 Programing Associate Josh Strauss said, “An award-winning screen icon that defined a generation, Raquel Welch remains an unrivaled presence on the big screen, fueled by an infectious charisma combined with her exquisite organic beauty. It will be a thrill to offer this retrospective of her work as well as have Raquel herself, on stage at the Walter Reade Theater to talk about several of those films and her experiences making them.”

Born Jo Raquel Tejada on September 5, 1940 in Chicago, Illinois, and raised in San Diego, California, Raquel Welch won a number of teen beauty titles (“Miss Photogenic,” “Miss La Jolla,” and “Miss San Diego” among them) prior to studying theater arts at San Diego State College on a scholarship starting in 1958.

Welch’s acting career got its start on television in the early 60s with small roles on popular series such as “The Virginian,” “McHale’s Navy,” and “Bewitched,” as well as films like ROUSTABOUT (1964) with Elvis Presley, DO NOT DISTURB (1965) with Doris Day and A SWINGIN’ SUMMER (1965).

However, Welch’s appearances in Richard Fleischer’s FANTASTIC VOYAGE (1966) and in Hammer Film’s ONE MILLION YEARS B.C. (1967) (as well as that of her now, iconic, doeskin bikini in that film) effectively established Welch as her generation’s sex symbol. She followed with notable roles as the deadly sin representing “lust” opposite Dudley Moore and Peter Cook in BEDAZZLED (1967) and as the title secret agent in the sexy spy spoof FATHOM (1967). Her scenes with former pro football player Jim Brown in the western 100 RIFLES (1969) as well as the transgendered title role in the audacious MYRA BRECKINRIDGE (1970) infamously adapted from Gore Vidal’s novel also courted notoriety at the time.

Burt Reynolds is all bronzed-and-mustachioed machismo as ‘Yaqui Joe Herrara,’ the “half-breed” hero of Tom Gries’ 100 RIFLES. Stealing $6,000 to supply weapons for the rebellion of his people against their Mexican oppressors, Reynolds shares the screen with football star-cum-actor Jim Brown as an Arizona lawman who reluctantly joins his cause, and a show-stopping Raquel Welch as the untamed revolutionary ‘Sarita.’ Famed for its pioneering steamy scenes between Welch and Brown, 100 RIFLES is an energetic western rife with gun-fighting mayhem, high-speed horse chases, and whisky-swilling hijinks.

When a Soviet superscientist falls into a coma, it’s up to a team of his colleagues to save his life by being shrunk down and sent into his body. Director and master of widescreen Richard Fleischer (20,000 LEAGUES UNDER THE SEA) laces the adventure with groovy special effects, as the scientist’s submarine (the “Proteus”) journeys through the treacherous heart and lungs and faces the wrath of protective blood cells. Welch stars as technical assistant ‘Cora,’ alongside Arthur Kennedy, Donald Pleasence, and Stephen Boyd.

Screens on Sunday, February 12 at 7:00PM. Raquel Welch will participate in a post-screening Q&A.

Welch is “the hottest thing on wheels” as roller derby champ ‘K.C. Carr,’ fighting to hold her own in the sport’s cutthroat world of fierce rivals and treacherous team politics. K.C.’s story of balancing personal and professional life involved bone-crunching realism—even months of skating practice couldn’t save Raquel from a broken wrist. Spearheaded and co-produced by the star, the film features derby pros such as Judy Arnold of the Philadelphia Warriors, and John Hall and Danny “Carrot Top” Reilly from the L.A. Thunderbirds.

Screens on Sunday, February 12 at 4:00PM. Raquel Welch will participate in a post-screening Q&A.

On the anniversary of his wife Sheila’s death, millionaire Clinton Green orchestrates a gossipy cat-and-mouse guessing game on a yacht for his Hollywood friends that quickly devolves into murder. The delightfully cast mystery by director Herbert Ross also features Welch poking fun at stardom as bombshell Alice, James Mason as a has-been director, Dyan Cannon as an agent, and James Coburn as the devious host. Written by Stephen Sondheim and Anthony Perkins, it’s an engaging mix of twists and turns, tweaking of Hollywood’s ways.

Raquel Welch will introduce the screening on the 12th.

Bill Cosby, Harvey Keitel star with Welch in this vintage widescreen slice of Seventies subculture films, set in the strange days of private ambulance companies in Los Angeles. In Peter Yates’s boisterous black comedy, tough Mother (Cosby) and his hard-working, hard-partying crew race to get to the scene of accidents before other ambulances, while dispatcher “Juggs” (Welch) just wants to prove her life-saving chops. The crew’s rude surprises on the job have the ring of true-to-life anecdotes, aided by a colorful supporting cast (Allen Garfield as the company owner as well as Larry Hagman, Bruce Davison, L.Q. Jones, and Dick Butkus).

One of the most notorious Hollywood attempts to shake things up in the wake of the Sixties was this adaptation of Gore Vidal’s rambunctious satirical novel. Welch stars as ‘Myra,’ a brilliant whirlwind who installs herself at an eccentric acting school run by her uncle (John Huston) and proceeds to seduce an all-American student and his girlfriend (Farrah Fawcett). Myra, of course, begins life as Myron (played by New York Observer critic Rex Reed), who, after a Fellini-esque operation, continues to appear to Myra as the film goes on. Adding to the eye-popping proceedings are musical numbers starring 76-year-old Mae West as a sexpot casting agent flanked by dancers, and the fascinating interpolation of old film clips from classic 20th Century Fox productions.

Screens on Wednesday, Friday, February 10 at 6:15PMand Monday, February 13 at 4:00PM. Raquel Welch will participate in a Q&A following the screening on the 10th.

Featuring special effects by Ray Harryhausen, this Hammer Films classic details the power struggles of early man and showcases Welch in a starring role clad in an iconic fur two-piece. When young Tumak (John Richardson) is ousted from the Rock tribe, he finds romance with a maiden (played by Welch) from the Shell tribe. The high stakes of the prehistoric world come alive with Harryhausen’s stop-motion magic, which feature a rip-roaring allosaurus attack, along with assorted other beasts.

Raquel Welch will introduce the screening on the 11th.

Full of stylish derring-do and infectious good humor, this Musketeers adventure from the director of A HARD DAY’S NIGHT is a sheer delight. Sword-fighting and court intrigue are in plentiful supply as the fantastic three (Oliver Reed, Frank Finlay, Richard Chamberlain) plus one (Michael York as D’Artagnan) deal with trouble surrounding France’s indiscreet Queen (Geraldine Chaplin). Demonstrating a flair for farce, Welch plays the Queen’s dressmaker who catches D’Artagnan’s eye. Featuring Charlton Heston as Cardinal Richelieu, and Faye Dunaway and Christopher Lee as scheming confederates.

Screens on Saturday, February 11 at 6:45PM and Monday, February 13 at 1:45PM. Raquel Welch will participate in a Q&A following the screening on the 11th.

In typically dazzling Merchant Ivory fashion, THE WILD PARTY is a stylish snapshot of 1920s Hollywood decadence, based on the notorious titular poem by Joseph Moncure March. Aging comedian Jolly Grimm (James Coco) attempts to celebrate his big comeback by staging a party, but the event quickly turns into a free-for-all, with his paramour Queenie (Raquel Welch) hungrily pursued by a hot young actor (Perry King). It’s a fascinating production, characteristically well-mounted by Merchant-Ivory, that captures both the sourness and the nostalgia of the scene. The film also stars Tiffany Bolling and David Dukes.

Under the leadership of Rose Kuo, Executive Director, and Richard Peña, Program Director, theFilm Society of Lincoln Center offers the best in international, classic and cutting-edge independent cinema. The Film Society presents two film festivals that attract global attention: the New York Film Festival, currently planning its 50th edition, and New Directors/New Films which, since its founding in 1972, has been produced in collaboration with MoMA. The Film Society also publishes the award-winning Film Comment Magazine, and for over three decades has given an annual award—now named “The Chaplin Award”—to a major figure in world cinema. Past recipients of this award include Charlie Chaplin, Alfred Hitchcock, Martin Scorsese, Meryl Streep, and Tom Hanks. The Film Society presents a year-round calendar of programming, panels, lectures, educational programs and specialty film releases at its Walter Reade Theater and the new state-of-the-art Elinor Bunin Munroe Film Center.