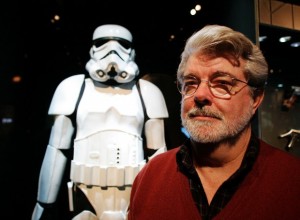 For any fans awaiting future “Star Wars” films from George Lucas, it’s going to be a long wait. The creator of the famed series says he’s not going to make any more of these movies and that he’s essentially retiring. And for that he blames the harsh feedback from certain fans.

“Why would I make any more when everybody yells at you all the time and says what a terrible person you are?” he tells the New York Times.

Lucas continues to bash these critics despite the fact that their appreciation for the series helped it generate $4.4 billion in worldwide box office sales.

“On the Internet, all those same guys that are complaining I made a change are completely changing the movie,” Lucas says. “I’m saying: ‘Fine. But my movie, with my name on it, that says I did it, needs to be the way I want it.'”

Lucas drew strong attacks from “Star Wars” fans for characters like Jar Jar Binks and for digital additions to the DVDs and re-releases of the six-part series.

“I’m moving away from the business, from the company, from all this kind of stuff,” he says.