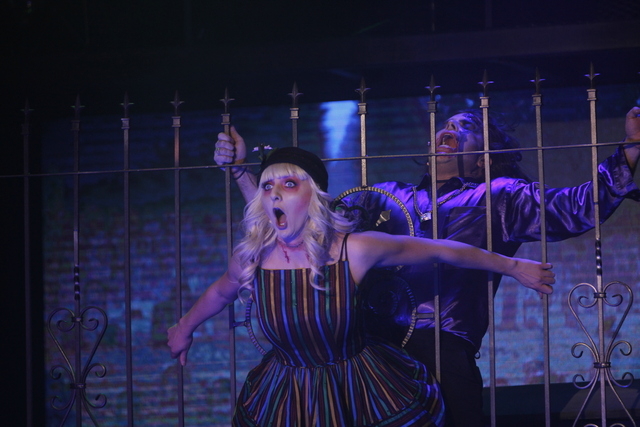 Tired of waiting for a “Pride and Prejudice and Zombies” movie? There’s a Las Vegas show which at least offers a taste of how “Cabaret”-with-zombies would mash up.

Enoch Scott’s emcee of “Zombie Burlesque” isn’t all that much more pasty-faced than the ghoulish host of the Broadway musical. Just a little more blood around the mouth, basically.

The V Theater’s former restaurant space, remodeled for “Zombie,” really does feel like a cabaret.

And the burlesque gals are less gaunt, more lifelike than some of your bleaker stagings of “Cabaret” (I’m talkin’ about you, Sam Mendes). Downright sexy they are, if you can look past the green complexions and some aggressive behavior when the topic of “brains” comes up.

“Zombie Burlesque” doesn’t take place in 1930s Berlin, but — as a black-and-white prologue video tells us — a 1950s era of truce between humans and zombies.

Fast-forwarding beyond the combative years of your usual zombie-apocalypse flicks, this one imagines the day when humans have agreed to feed our prisoners to the walking dead. And they in turn put their hotter creatures forth to entertain us in places such as “Club Z.”

So yeah, it’s really what the title says. And it sticks to its premise. As B-movie as that is, it’s actually a slick piece of craftsmanship. One that lands in a good space between the familiar, touristy Vegas fare producer David Saxe does well, and the more daring, less-generic shows we need to move forward in the nightclub era.

A quick test right now. Are you one of those people, like me, who need only know there’s a burlesque homage to “Attack of the 50 Foot Woman”? With the astonishing Lora Kelsy swatting at a miniature helicopter?

OK. You’re in. But everyone else?

Saxe and director-choreographer Tiger Martina understand the old models are broken when it comes to reaching new ticket-buyers. But these creators of “Vegas! The Show!” are realists who won’t put up something ticket brokers can’t sell.

So, a balance. You have the usual shtick where the ladies haul an audience guy up to the stage to untuck his shirt and ruffle his hair, as stunning singer Sophia Monica (formerly of “Peepshow” and the Pussycat Dolls) belts “I Just Want to Make Love to You.”

But right after that? A raunchy song parody, in which a new male zombie is taught that he can eat a particular body part without being considered gay.

The specialty acts strike a balance too, from the old-school drag comedy of Tiny Bubbles (Steve Daly), to the gross-out contortions of “America’s Got Talent” contestant Turf (Alonzo Jones).

Saxe says he is still making changes, including improvements to the seating area, on the march to a still-unspecified “grand opening.” Already it’s more consistent, if no less campy, than “Vegas Nocturne” at Rose.Rabbit.Lie., another new attempt to bring nightlife back into showrooms.

The zombie premise is creatively explored in several numbers, including Monica cavorting between the still-occupied graves of “Mr. Ron Guy” and “Mr. Ron Away” to a swingin’ take on Betty Hutton/Bjork’s “It’s Oh So Quiet.”

Name-dropping Bjork in a Las Vegas show review is a testament to how far Saxe, Martina and arranger Pat Caddick have reached with the seven-piece band (which is downright extravagant for a small show).

Still, you hope they keep reaching. The manic, full-throttle tone only occasionally gets a welcome change-up, such as an adagio by Antenor da Silva and Amber Snow bemoaning the fact, as Scott tells us, “The one thing we zombies can’t do is love.”

By the last 20 minutes or so, the zombie theme seems like it’s being grafted onto more conventional cruise-ship fare. Another dance number set to the rockabilly “Woo Hoo”?

And the wackiness doesn’t always have to be full throttle. The B-movie premise would really lend itself to a few “Airplane!”-like moments where characters such as Robert Stack weren’t in on the joke.

Remember, we already bought in for a show called “Zombie Burlesque.” You don’t have to always reassure us. We know there are enough zombies in the nightclubs already. 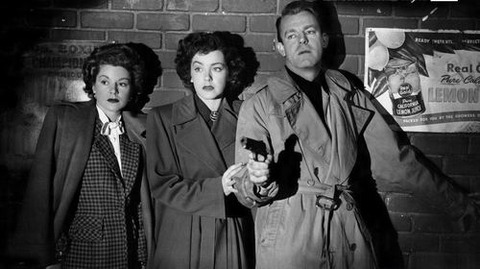 0 117
The Dark Crimes Of Anthony Mann

0 116
A Bright And Shining Cinematic Light 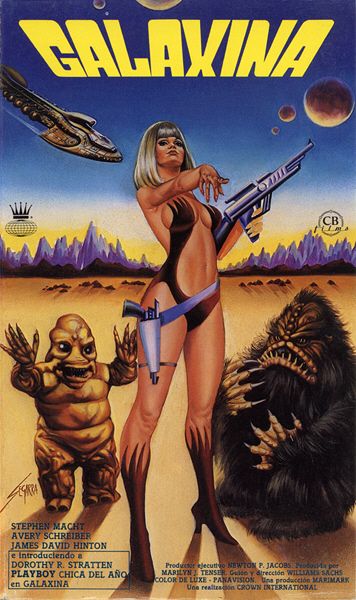 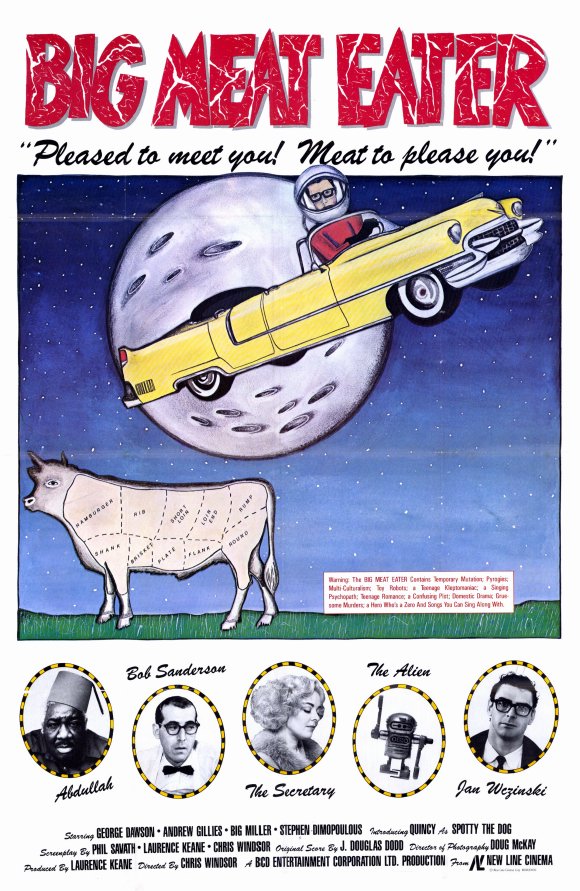