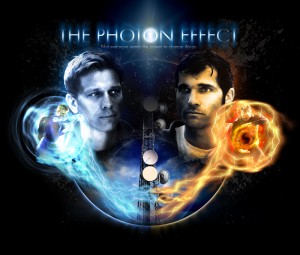 Baltimore, MD, –(PR.com)– After four and a half years of filming and post production, Alpha Dog Productions LLC releases its first feature film The Photon Effect on DVD. An official selection of the 2011 Chicago Comic and Entertainment Expo, The Photon Effect delivers superhero action and effects not before seen in microbudget indie filmmaking.

The film not only has comic book inspired eye candy, but also features the drama of family struggle and corporate espionage. As critic Daniel Frazier from Comic Hero News states, “With top-notch character development, writing, and acting, The Photon Effect is a superhero movie not to be missed.”

During a freak accident involving an experimental microwave antenna, two tower engineers gain superhuman abilities. While the powers they gain are similar, the paths they take afterwards are not. Derek Powers wants to use his abilities to help others, and to uncover the truth behind Randall Communications Inc (RCI), the company that designed the technology. Jay Powers, Derek’s co-worker, cousin, and best friend, becomes intoxicated with his abilities, and volunteers for additional experiments performed by RCI. The series of events ultimately leads to the birth of a new superhero, and supervillain.