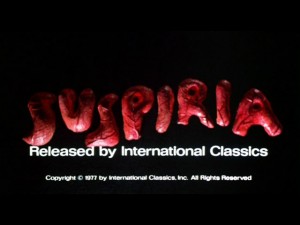 On Tuesday January 31st at 7:30pm at the Hollywood Theatre, The Grindhouse Film Festival presents an extremely rare 35mm print
of the Italian horror classic Suspiria! An American ballet student, Suzy Bannion (Jessica Harper), arrives from her flight in Munich, Germany on a stormy night to enroll in a prestigious dance academy in Freiburg. After Suzy is unable to gain access into the academy, she decides to spend the night around town.

Meanwhile, Pat Hingle (Eva Axén) (a former student who is expelled from the academy and seen leaving the academy in a somewhat frightened mood by Suzy) finds refuge at a friend’s house in town. After Pat locks herself inside of the house’s bathroom, a mysterious arm smothers Pat against the glass and repeatedly stabs her with a large knife and then graphically disembowels her. Her friend overhears her screaming and tries to scream for help, although nobody replies. Pat is then bound with a cord before she is hanged in mid-air after crashing through a large stained-glass ceiling. Her friend is killed directly below by the falling glass and metal.

Upon Suzy’s arrival at the academy the next morning, she is introduced to Madame Blanc (Joan Bennett) and Miss Tanner (Alida Valli). Suzy overhears an ongoing conversation about Pat’s murder between a group of people, and recalls that she witnessed Pat leaving the academy the previous night. Suzy is then escorted to the ballet student’s locker room, where she meets Sarah (Stefania Casini) and Olga (Barbara Magnolfi), with whom she lives off-campus. The following morning, Blanc offers Suzy a dormitory room, but she declines Blanc’s offer. After a strange encounter with the academy’s cook (Franca Scagnetti), Suzy seemingly struggles before fainting during a lesson. Later that night, Suzy awakens to discover that she has been moved into a dormitory room against her wishes. The doctors then tell Suzy that she is to be “medicated” with a glass of wine daily. Suzy befriends Sarah after the two are roomed together. As Suzy and the rest of the students prepare for dinner, hundreds of maggots appear to fall from the ceiling due to spoiled food boxed in the attic. The girls are then ordered to sleep in the practice hall overnight. During the night, Sarah identifies a distinctive whistling snore as that of the school’s director, who is not due to return to the academy for several weeks.

The next morning, Tanner orders the blind pianist, Daniel (Flavio Bucci), to leave the academy immediately after his guide dog bites her nephew’s arm. Later that night, Sarah overhears the teacher’s footsteps and begins to count them whilst Suzy becomes irresistibly drowsy and falls asleep. Meanwhile, while Daniel and his guide dog cross a plaza within the city, Daniel sense a strange presence. Suddenly, his seemingly calm dog lunges at Daniel and tears his throat out, killing him. The next day, Suzy recalls the words “iris” and “secret” from Pat’s mumbling before leaving the academy. Later that night, Suzy and Sarah go for a swim while Sarah reveals to Suzy that she and Pat were close friends, and recalls that Pat had been “talking strangely for some time”. As the two girls search for Pat’s notes in Sarah’s room, they appear to be stolen. Suzy suddenly becomes drowsy and falls asleep before Sarah flees to the attic after hearing approaching footsteps. Sarah goes on a lengthy chase away from an unseen pursuer and, thinking she will be able to escape through a window into another room, falls into a huge pile of barbed wire. Becoming entangled, she struggles in anguish until her attacker appears and slits her throat.

The following morning, Blanc and Tanner inform Suzy that Sarah is nowhere to be found and that her room is entirely empty. Suzy then meets one of Sarah’s acquaintances, a psychologist named Dr. Mandel (Udo Kier), who explains that the academy was founded by Helena Markos, a cruel Greek émigré who was widely believed to be a witch. Dr. Mandel’s colleague, Professor Millus, then tells Suzy that a coven can only survive with their queen. Upon Suzy’s return to the academy that night, she discovers that all of the students have gone to the theater. After becoming suspicious of her prescribed glass of wine, she pours it down the sink. She then overhears the footsteps Sarah identified before, and follows them to Blanc’s office. She suddenly recalls Pat’s mumbling after discovering irises painted all over the walls of Blanc’s office. After entering a hidden passage, she discovers Blanc, Tanner and the staff forming a ritual where they plot Suzy’s death. Unseen, Suzy then turns to find Sarah’s body nailed to a coffin.

Frightened, Suzy then sneaks into another room, where she accidentally awakens a shadowy figure who reveals herself as Helena Markos. An ancient, hideous witch, Helena begins to taunt Suzy, revealing that Madame Blanc, Miss Tanner, some students and the rest of the staff are members of her coven and they have happily participated or used their witchcraft in the brutal murders. Helena then orders Sarah’s nearby corpse to rise from the dead to murder Suzy. Suzy then stabs Helena with one of the room’s decorative knives, which appears to kill her (she fades from view screaming) and Sarah’s reanimated corpse. Helena’s demise seems to cause a sudden fire. As the academy is slowly destroyed with the coven inside, Suzy manages to escape before the entire building catches on fire. The screaming of the coven of witches as they die is heard over the pulsating soundtrack.