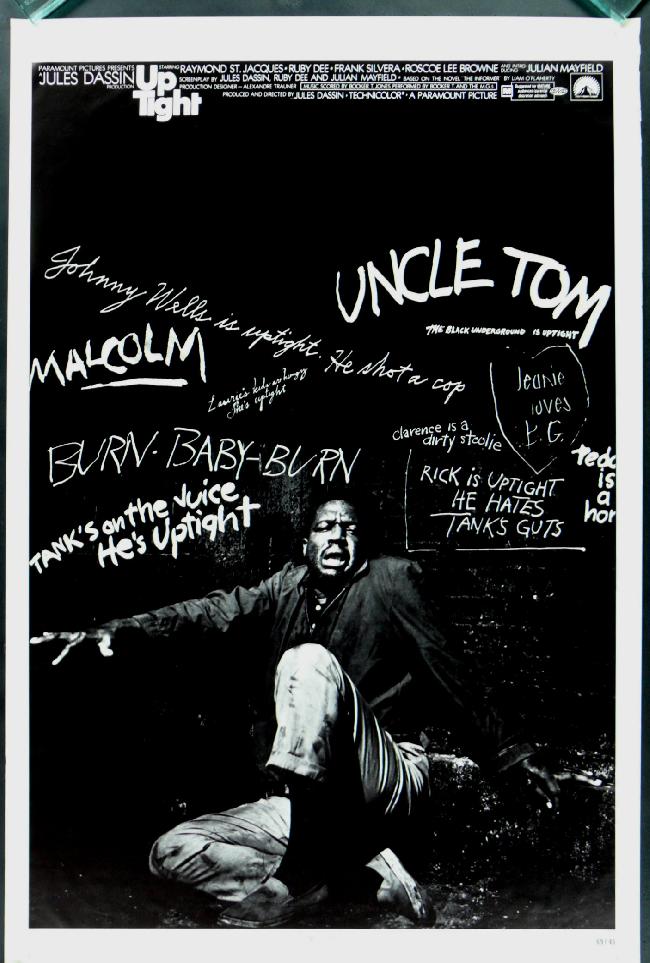 By all cultural accounts, 1968 was a hellish year for America. The assassinations of Martin Luther King and Robert Kennedy helped spark the “burn baby burn” sensibility ignited in the streets. It was also during this turbulent period that Paramount Pictures reluctantly agreed to finance Jules Dassin’s remake of the classic film The Informer into militant action film Up Tight.

Moving the action from the streets of Ireland to the ghettos of Ohio, Dassin’s bleak exploration into the world of sharp-dressed Black revolutionaries introduced the Blaxploitation aesthetics that later influenced a crop of Black action films including Sweet Sweetback’s Baadasssss Song (1971), Shaft (197), Super Fly (1972) and others. In addition, the film stars an ensemble of actors that would a few years later become major stars including: Ruby Dee (American Gangster), Raymond St. Jacques (Cotton Comes to Harlem), Max Julian (The Mack), Janet MacLachlan (Sounder), Juanita Moore (The Mack), Roscoe Lee Browne (Uptown Saturday Night), James McEachin (Buck and the Preacher) and Dick Anthony Williams. Best known for his role as the sharp-tongued pimp “Pretty Tony” in The Mack, this was the film debut for Chicago native Williams. Playing Corbin with the heated coolness of hot ice, his performance was brilliant.

Up Tight, whose original title was The Betrayal, focuses on a group of fictional revolutionaries called The Committee. In his otherwise positive 1969 review of Up Tight, critic Roger Ebert wrote in the Chicago Sun Times, “It’s remarkable that a major studio financed and released this film.”

However, according to EBONY, in a November 1968 story on the film, the studio did try to bow out on their commitment to bankroll the film. “Paramount did not want to release the film,” stated co-star then-84-year-old Ruby Dee, who also co-wrote the script, at a 2008 screening of the film at the Brooklyn Academy of Music as part of the Afro-Punk Festival. After Dassin passionately argued the project’s relevance, a Paramount executive supposedly said, “I’m crazy, but we’ll do it.” Reportedly, the budget was little over two million dollars.

A New York City native, Dassin grew-up in Harlem and moved to Hollywood in 1940 beginning his career as an apprentice with Alfred Hitchcock. A few years later, proving he too was a visionary filmmaker, Dassin directed the film noir gems Brute Force (1947), The Naked City (1948) and Night and the City (1950). In 1951, Dassin’s successful Hollywood career came to a screeching halt when, after being labeled a Communist before the House Un-American Activities Committee, he relocating to France. He struggled for a few years after Hollywood studios informed European producers that no Dassin film would ever be distributed in the states.

Unafraid of the repercussions, producer Henri Bérard took a chance in 1955 and hired Dassin to adapt the noir novel Rififi. The film was successful and became the template for future heist flicks including The Anderson Tapes and Ocean’s 11. Yet, while Dassin won the 1955 Best Director Award at the Cannes Film Festival, it would still be another thirteen years before he was hired by an American company to shoot a movie in the states.

Up Tight opens with stark newsreel styled footage Dassin shot of Martin Luther King’s funeral procession in Atlanta disgusted and distraught bystanders wept. “As we were finishing the shoot, Dr. King was assassinated, so Jules took his cameras down to Memphis and Atlanta and incorporated some of that footage into the beginning of the film,” Dee explained. “We then rewrote and reshot some of the film to reflect what had just happened.”

Minutes into the movie, the camera pulls back to show a group of young men watching the sad spectacle of the funeral on a television set inside a rundown Cleveland, Ohio barbershop. “I brought the story to Cleveland because I think Cleveland is more representative of a big American city than any other,” Dassin told the Ohio Plain Dealer at the time. Shot in a section known as Hough, two years before the community was the scene of an infamous riot that took place over six nights, we see a community in shambles and on the verge of explosion. The tenements and tackyhotels, side streets and steel mills look as though they might blow away in the next storm. In the same way King’s death led to riots in streets major cities, it was used as motivation behind the crime in Up Tight that sets the pulp fiction aspect of the movie in motion with a failed heist of a gun armory the night of King’s funeral.

“The man from love got his head shot off,” spits Jeannie (Janet MacLachlan), one of the militants. “And all those people learned nothing.” Coldly, the organization’s co-leader B.G., portrayed superbly by Nehru jacket wearing Raymond St. Jacques, replied, “Death is a fast teacher. They’ll learn, it’s clearer now.” A few scenes later the entire Committee, led by soft-spoken Corbin (Dick Anthony Williams) meet-up inside their headquarters, an abandoned bowling alley. Film World magazine described the location as, “…something out of a Black Power nightmare.”

Two of the film’s stars, Julian Mayfield (Tank Williams) and Ruby Dee (Laurie), co-wrote the script with the director. Originally, Dassin sought Ruby’s husband actor/director Ossie Davis as a co-writer, but he was scheduled to be in Mexico shooting Sydney Pollack’s film Scalphunters starring Burt Lancaster. Having taken his wife to the meeting, Davis suggested Ruby would be just as good behind the typewriter and Dassin took his word.

“Ruby has a very strong, poetic talent,” Dassin told EBONY. “Her sense of images, her sense of sound is just marvelous. It was a very full collaboration.” Asked about the film’s title change from The Betrayal to Up Tight, Dee, who is also a Cleveland native, answered, “Jules was very pleased with when the new title was suggested. It was an uptight time. Being Black in America is an uptight situation. If you’re going to survive, you have to loosen-up.” Surprisingly, she had never seen the film prior to the 2008 screening in Brooklyn.

Dassin’s second script collaborator as well as the Up Tight’s star, was novelist, journalist and stage actor Julian Mayfield. The burly scribe had gotten the gig at the suggestion of co-star Frank Silva, whom he had met a few months before a writer’s conference at Fisk University. Mayfield had just returned to the country after being in exile in Ghana.

Although Up Tight was Mayfield’s first screenplay, his talent as a novelist on The Hit (1957) and The Long Night (1958) had been celebrated in Jet magazine years before the Dassin collaboration. “Julian Mayfield demonstrates with an almost disarming ease that he possesses narrative skill, a sense of dramatic unity and poetic feeling,” they wrote. Though partially forgotten since his death 1985, crime novelist and The Wire writer George Pelecanos reprinted Mayfield’s short story “The Last Days of Duncan Street” D.C. Noir 2: The Classics (Akashic Books) in 2008.

In their shared 1998 autobiography With Ossie and Ruby: In This Life Together, Dee wrote that director Dassin originally wanted James Earl Jones to play the intoxicated loser who betrays the Black militant organization, his woman, his best friend Johnny Wells and, in the end, himself.

Yet, while writing with Mayfield, the director realized he had the perfect “Tank” sitting next to him. “I don’t feel this will be a film we will be ashamed of,” Mayfield told a reporter in 1968. “Just seeing certain images will be so new, it will blow the minds of many people, Black and white, to see what is going on in this country.”

Working with cinematographer Boris Kaufman, who shot On the Waterfront (1953) and The Pawnbroker (1963), making Up Tight a visually nightmarish film that was arty, brutal and beautiful. Dassin created a claustrophobic cinematic landscape that New York magazine critic Judith Crist described as, “teeming and pulsing one minute, stark in its solitudes and isolations the next.”

“But, it was about the music too,” says Darius James, author of That’s Blaxploitation!: Roots of the Baadasssss ‘Tude. “Booker T. & the MG’s doing ‘Time is Tight’ was the best. This was a few years before the big soul soundtracks like Shaft or Super Fly, and people loved it.”

According to journalist Rob Bowman, author of the fascinating book Soulville USA: The Story of Stax Records (1997), the group was commissioned after the film was completed. In preparation to learning the art Page 3 of 3

“Quincy was complimentary when I came to California,” Booker T. told Bowman. “He felt we were equals. He really made me feel good about the music, asking me for advice, for tips about making stuff funky.” The score was recorded in Paris, where Dassin edited the film, away from the prying eyes of studio executives who had threatened, according to Ruby Dee, to pull the film.

The Up Tight soundtrack spawned Booker T. & the MG’s second biggest single “Time is Tight;” heard in fragments throughout, the complete song serves as the film’s coda. Booker T. wanted to name the song after the film, but didn’t want to confuse the audience with the 1966 Stevie Wonder song of the same name. The single went to #7 on the R&B charts and #6 on the pop charts. In Soulville, writer Bowman says, “‘Time is Tight’ just might be Booker T & the MGs finest moment.”

Cultural critic Greg Tate recalls seeing the film at a drive-in when he was a kid. “The scene where the hood rains bottles on the cops is still a visceral childhood memory,” Tate explained, still excited forty years later by an especially impressionistic moment in the movie.

While Up Tight remains one of the best gritty political crime features from that period, it was soon, according to Ruby Dee, withdrawn by the studio. Although it can occasionally be seen on late-night television, at repertoire houses or film festivals, Paramount has never released the film on video or DVD.

After the disheartening experience on Up Tight, director Jules Dassin, who died in Athens, Greece in 2008 at the age of 96, never made another movie in America.

Cultural critic Michael A. Gonzales has written cover stories for Vibe, Uptown, Essence, Ego Trip, XXL, Wax Poetics. He has also written for Stop Smiling, New York magazine and The Village Voice. A contributing editor to the arts journal HYCIDE, he also co-edits the erotica journal Open. Read him at Blackadelicpop.blogspot.com and follow him on twitter @gonzomike