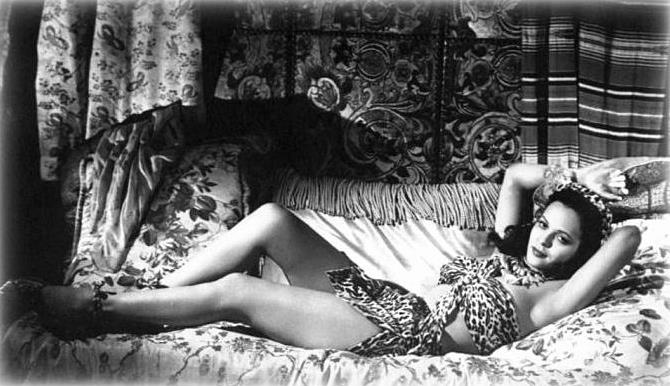 Aquanetta, who died aged 83, was a Hollywood siren billed as “The Venezuelan Volcano”, although she had been born in Wyoming of native American descent.

Universal Studios cast her most notably as Lea, the High Priestess, opposite Johnny Weissmuller in Tarzan and the Leopard Women (1946), which earned her rave reviews. “The head push of this movie is a vicious star named Acquanetta,” reported the Los Angeles Times. “If Tarzan is the Lord of the Jungle, Acquanetta is most definitely the Lady. This is a star in the making.”

Acquanetta was born Burnu Acquanetta – “Burning Fire, Deep Water” – on an Indian reservation at Ozone, near Cheyenne, Wyoming, in 1921. Unwanted by her Arapaho mother and French-English-Cherokee father, she was given up to a woman at Norristown, Pennsylvania.

Aged 16, she made her way to New York, where a fashion photographer spotted her walking along Broadway. “He stood before me, his mouth wide open,” she remembered. “Moments later I was in a swanky Manhattan office. Before the week was out, I was training hard, walking with books on my head, being photographed for glossy fashion magazines and answering calls from rich gentlemen asking me to be their date for an evening. It was beautifully glamorous.”

Her graduation from model to actress was just as accidental. “I was visiting Los Angeles, and whilst staying at The Beverly Hills Hotel, a chap came up, a talent scout, and said I should be in the movies. He said sign here, so I signed, and bang, I was an actress.”

Acquanetta made her film debut in Arabian Nights (1942), followed by the role of the beautiful Luani in Rhythm of the Islands (1943). Her dark complexion and alluring green eyes prompted Universal’s publicity department to refer to her as a native of various exotic locations. It was said that she slept in a tepee, and sometimes that her grandfather was the illegitimate son of an English king.

By her third film, Universal had dispensed with her first name. In Captive Wild Women (1943), Acquanetta played Paula Dupree, the ape woman transformed from gorilla to sombre-faced human beauty by the mad scientist John Carradine. She returned as the mysterious Paula in the sequel Jungle Woman (1944).

She enjoyed working with the Tarzan cast, but when Weissmuller offered her the lead in the Jungle Jim series, she declined. Instead she played the native girl in The Lost Continent (1951), with Cesar Romero, and appeared the same year in Callaway Went Thataway.

Acquanetta had walked out on her Universal contract in 1951, complaining later about the way studio bosses had come on to her, “grabbed and pulled and chased [me] around the executives’ offices”.

Abandoning her film career, she went to Mexico where she became a “goodwill ambassador” for President Franklin D Roosevelt, and fell in love with the man who became her first husband. They had a son who died of cancer before he was five.

She subsequently married Jack Ross, a wealthy car dealer, and settled in Phoenix, Arizona, where she and her husband became prominent philanthropists. By the mid-1950s, Acquanetta was hosting her own local radio and television programmes. She divorced Ross during the 1980s.

She returned to acting with Grizzly Adams – The Legend Never Dies (1989). As the horror and adventure films made at Universal Studios came to be seen as classics, so interest in Acquanetta’s career was revived. She was a regular guest at Universal’s annual reunion and, until the onset of Alzheimer’s, a frequent guest at film galas.