“H.B. “TOBY”‘ HALICKIlived the American dream. At 15 he left his home in Dunkirk, New York and moved to California. He started working pumping gas and within two years owned his own body shop. He enrolled in real estate classes and began investing in commercial properties, which lead to numerous land holdings and a successful junkyard business. An avid collector, Halicki also owned one of the world’s largest toy and automobile collections. 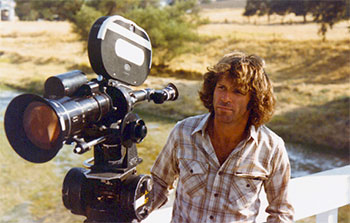 By 1974 he wrote, produced, directed and acted in his first movie, “Gone in 60 Seconds.” He became known as the “Car Crash King” when “Gone in 60 Seconds” became a cult classic and the Star of the movie “Eleanor” (Fastback Ford Mustang) became a household name. He followed his success in movies with “The Junkman” and “Deadline Auto Theft”.

In 1989 he began shooting “Gone in 60 Seconds 2” in which both he and his new bride, Denice would star. During production, as Halicki prepared to shoot one of the most dramatic stunt sequences of his sequel, the unthinkable occurred. When a 160-foot water tower rigged to fall later in the scene collapsed prematurely, the tower snapped a supporting cable which sheared a nearby power pole. The power pole came crashing to the ground, instantly killing Halicki as crowds of fans, the press and his wife looked on. 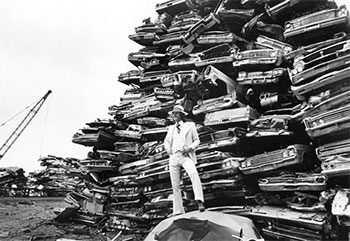 In pursuit of keeping Toby’s dream alive, ten years later, Denice executive produced the remake of her husband’s original “Gone in 60 Seconds.” Jerry Bruckheimer Productions presented the action thriller GONE IN 60 SECONDS, starring Nicholas Cage, Angelina Jolie, Giovanni Ribisi and Eleanor (Fastback Ford Mustang). A fast-paced 2000 version of the 1974 classic, co-stars include Robert Duvall, Delroy Lindo and Will Patton. The film was written by Scott Rosenberg and directed by Dominic Sena. Dominic Sena knew Toby and his films well because he worked as a cameraman on “The Junkman” with Toby in 1980.

Not unlike her late husband, Toby, Denice pursued the dream to see “Gone In 60 Seconds” remade and all of H.B. Halicki’s films restored, digitally re-mastered and released on DVD and VHS, with vision, passion and, of course, gasoline in her veins.

Halicki Films re-released the original “Gone in 60 Seconds” with Eleanor’s 40-minute car chase scene and the Critics and Consumers are wild about it. “One of the Greatest Chase Scenes in History!”…USA Today. “The Junkman” which is 2nd in the Gone in 60 Seconds series has also been re-released. “The Junkman” is in the Guinness Book of World Records and the Guinness Museum for the most amount of car crashes in a film. In addition to the release of “Gone in 60 Seconds” and “The Junkman”, Halicki Films has issued a special edition DVD which includes “Deadline Auto Theft”, “Gone In 60 Seconds 2” rare footage and a 45 minute documentary “The Life and Times of H.B. Halicki”. The DVD has a car crash counter and all the DVD’s are loaded with extras for the fans. Also, under Denice’s helm, Racing Champions ERTL and Johnny Lightning joined forces with Halicki Films and have released a series of toys, models and die cast cars of Eleanor and other hot cars from the Gone in 60 Seconds series.