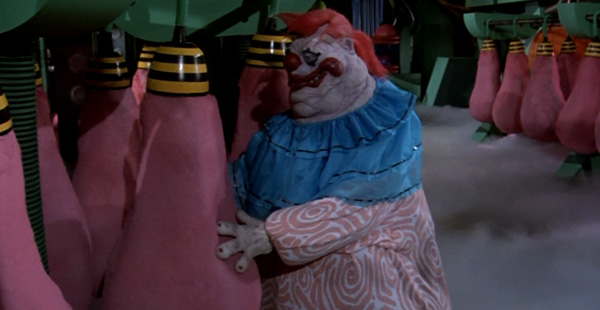 Killer Klowns from Outer Space, which is one of the most popular cult classics around. Even your grandma has heard about this one. It also happens to be another one of my favorites. While I have surpassed the ability to count the number of times I have watched this film on my fingers and toes; it still remains as fun to watch as ever.

Mike and Debbie, a couple of young lovers, are finding out what each other’s body are for at the “Top of the World,” the place where kids go to make out. The thing is, they aren’t kids, high school or college. They are more like adults on a date, lying on an inflatable raft in the back seat of a crappy car. Every girl’s dream date, right? While the two lovers are gazing at the stars a brilliant flash of light streaks across the night sky and appears to crash in the nearby forest. Logically, they decide to pack up the raft and go check it out.

Turns out the meteor was a giant carnival tent. Full of giant Klowns that like to make cotton candy out of people. We know this is strange because someone at one point says, “This isn’t what you think it is! NOBODY stores cotton candy like this!” Which is a very correct statement. Eventually, the love birds enlist the help of the cops. Unfortunately, the cops consist of Debbie’s ex-boyfriend, who is as helpful as you can imagine, and Mooney, an old school vet who hates everything and everyone – but mostly kids. There’s also the Terenzi brothers and their ice cream truck. They are nearly the silliest thing in this movie. Almost.

The Klowns take that honor, though, by combining the usage killer pies, balloon animal blood hounds, killer popcorn, and killer shadow puppets. The thing is, the Klowns are both hilarious and simultaneously frightening. The costume design is superb; in fact, the entire set design is brilliant as well.

It is truly one of the best horror comedies, heavy on the comedy, ever made.