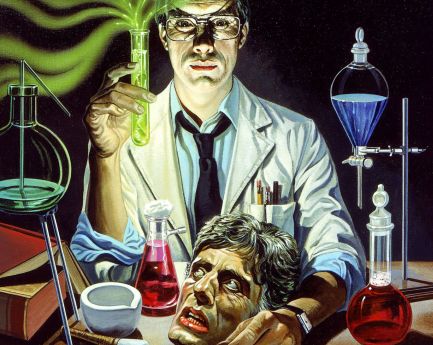 An American director, writer, producer Gordon burst on to the horror scene with RE-ANIMATOR, a farcially gory adaptation of Lovecraft’s ‘Herbert West – Re-Animator’ (1922). He has an extensive and controversial background in theatre dating back to obscenity charges levelled against a university Peter Pan in which Tinker Bell was gay, Peter Pan a flower child and the voyage to Never-Never Land an LSD trip. Gordon was co-founder and longtime artistic director of Chicago’s famous Organic Theatre, where his directing credits included the world premier of David Mamet’s Sexual Perversity in Chicago (1974). Gordon makes mostly low budget horror and s-f movies, mostly in association with producers Charles Band and/or Brian Yuzna: none quite match his debut, though all have demented performances or the odd idea to recommend them.

In high school Gordon majored in commercial art and apprenticed with a company for 6 months illustrating coke bottles! Realising this was not his career of choice he left and enrolled at the University of Wisconsin where he took some theatre and acting classes. Finding theatre more realistic than first thought, he formed the Organic Thetare, an ensemble that performed original works, many based on science fiction and horror concepts. The directors film career fell into place when he was introduced to Brian Yuzna by a mutual friend. Brian Yuzna wanted to become an independent producer and Gordon was developing a horror movie script – RE-ANIMATOR was the outcome. Amazingly RE-ANIMATOR was shot on a 20 day schedule witha first time director and camerman Robert Ebinger.