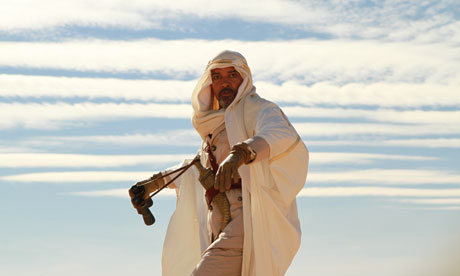 Financed largely by Arab countries and shot on location in Tunisia and Qatar, Black Gold is an Arabian Nights fable about the settlement of a long rivalry between two emirs on the Arabian peninsula at some unspecified time in the early 20th century, and how warfare breaks out when a Texas company strikes oil in the no man’s land separating the two countries. Nesib (Antonio Banderas) wants to use the new wealth to build schools and hospitals in his land and raise living standards; the austere Amar (Mark Strong) wishes to defy progress and avoid the temptations of mammon and materialism. It’s a tepid, timid affair, sexually, dramatically and politically. Nearer, in fact, to the B-movie easterns starring Maria Montez that Universal made in the 1940s than to Lawrence of Arabia, though no one actually says “It is written”, which I rather missed. Freddie Young and John Seale, who won Oscars as cinematographers on respectively Lawrence and The English Patient, both made sand look more interesting than it does here.