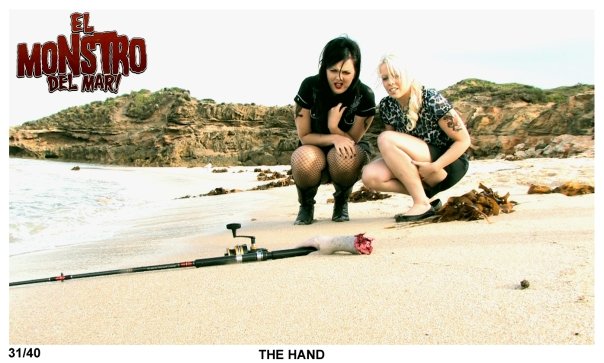 THE FILM:
When Quentin Tarantino and Robert Rodriguez’s GRINDHOUSE hit theaters a few years ago, it seemed like everyone was bandying about the term “grindhouse” for any film remotely exploitive or moderately budgeted. Many filmmakers began copying the scratched, jumpy and damaged print look Tarantino and Rodriguez used in their homage to the wonderfully sleazy, ultra violent world of early 1970’s exploitation films. The style came back in vogue for a while, if only on the direct to home video circuit. Now that a few years have passed, we are getting a whole new slew of real life “grindhouse” fare; no to low budget movies made with style and flair by up and coming filmmakers who just love movies and want to make flicks that are sheer fun.

Down under in Australia, rookie filmmaker Stuart Simpson has delivered a short feature blending the mise en scene of Russ Meyer (particularly the look and character types of his 1965 FASTER, PUSSYCAT! KILL! KILL!), the cheesy monsters of a 1950’s Roger Corman movie and the gore of a 1980’s Stuart Gordon movie. The result is the obvious labor of love, EL MONSTRO DEL MAR!

The film opens in the slightly overexposed black and white look of Meyer’s films with the psycho killer trio of Beretta (Nelli Scarlet), Blondie (Karli Madden) and Snowball (Kate Watts) stranded on the side of the road in their stalled car. When a pair of young lads arrives to help the ladies out, the boys get their throats slit and their car stolen for their trouble. This opening scene is perfectly handled and looks great. Scarlet is channeling the Tura Satana attitude to a tee, the guys are completely disposable and Simpson’s camerawork and editing (he did pretty much everything on this movie) captures the feel of Meyer’s work to the point when the film blasts into color, it is sad to see this look go.

However, we then become a Roger Corman movie with the hell-raising ladies going to their friend’s beach house for a weekend of partying. When they arrive, Blondie and Snowball immediately jump into the water only to have wheelchair-bound neighbor Joseph (Norman Yemm) start screaming at them to get out of the water. Naturally they mock him. But there is something in the water and a very good reason to stay out of it as they will soon find out.

EL MONSTRO DEL MAR! is a fun potpourri of styles and character-types from various B-movies. Even though it is very short, the second act seems to falter with very little happening (the trio party and get Joseph’s very straight laced granddaughter Hannah (Kyrie Capri) drunk.) However, the first and third acts are loads of none-stop fun and Simpson definitely pulled out all the stops for the grand monster attack climax. Is EL MONSTRO DEL MAR! a good movie? Nah, not really. Is it a good B-movie grindhouse flick? Yeah, it really is. Hopefully Simpson will continue to indulge his love of the genre as this movie shows great potential for a future member of the Roger Corman/Stuart Gordon/Russ Meyer/Herschel Gordon Lewis/Charles Band club of great B-movie directors.

THE DISC:
Like most of Breaking Glass Pictures’ DVD releases, the transfer here is inconsistent at best. The anamorphic 1.78 picture offers decent detail and clarity but nothing much in the way of fine detail (although close-ups frequently look very good.) Blacks are crushed pretty consistently (which does call attention to itself during several of the outdoor night scenes) and whites bloom occasionally. The opening black and white scenes look spot on though.

The Dolby Digital 2.0 stereo mix is fine for a no-budget film. Dialogue is all clear (although accents get particularly thick from time to time and there is no subtitle option, sadly) but don’t look for anything beyond. Stereo effects are few and an immersive sound environment is nowhere to be had, which actually works for the 1960’s feel Simpson was going for. If this film did have a spectacular sound mix it would have taken you out of the retro world he created.

THE EXTRAS:
The supplement loaded package kicks off with a pair of audio commentaries: the first with actresses Scarlet, Watts and Capri (a chatty, party track that is a fun listen) and one with Simpson and special effects creator Nick Kocsis (more technical, naturally, but also a fun track.)

“Behind The Scenes” is a short featurette consisting of mixture of gags on the set and various B-roll.

“Deleted Scenes” were a bit of a letdown and are best left skipped.

“Cast Interviews” is dominated by the cast’s reaction to viewing a rough cut of the opening ten minutes at the wrap party followed by various people revealing their favorite scenes to shoot.

A “Photo Gallery,” the original trailer for EL MONSTRO DEL MAR and a handful of other trailers from Breaking Glass round out a fairly good supplement section.

MY SAY:
A no budget Australian monster flick from a young filmmaker, EL MONSTRO DEL MAR! may not be for everybody, but lovers of B-movie grindhouse fare should have a great time with it. Recommended.