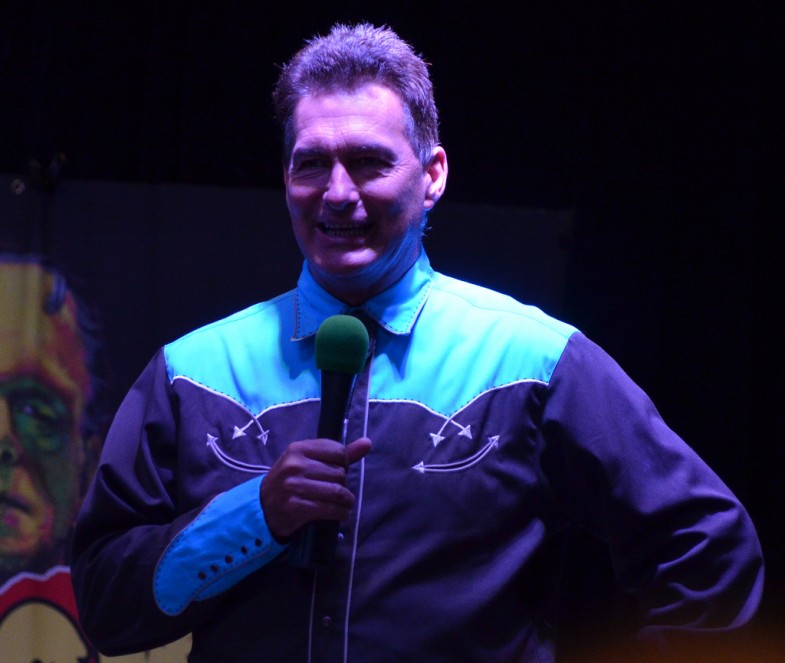 Joe Bob Briggs hails from Grapevine, Texas.
Somewhere along the way, he saw a LOT of drive-in movies and became an expert on this particular type of film.
In fact, he began to write about the films he saw, starting with his review of The Grim Reaper, which first appeared in the Dallas Times Herald on January 15, 1982 under the column title, “Joe Bob Goes to the Drive-in”. Voila, a legend was born.

Joe Bob’s column became an overnight sensation and soon it was being syndicated in more than fifty newspapers around the country. Besides delighting many readers, Joe Bob also offended some with his satiric views which were taken WAY TOO SERIOUSLY by certain groups – animal rights activists, the Dallas Cowboys Cheerleaders, college professors, feminists (At one point, he publicly challenged the president of the Dallas chapter of the National Organization for Women to a nude mud-wrestling match) and…well, the list could go on and on. But so could the list that includes fans of Joe Bob!

To make a long story short, Joe Bob’s stint with the Dallas Times Herald came to an end in 1985 after his spoof of the anthem, “We Are The World”. Joe Bob’s version of the song, “We Are the Weird”, featured drive-in movie stars like Pia Zadora and Leatherface from The Texas Chainsaw Massacre and the Swamp Thing. After a massive protest was led against the Times Herald office, the editor caved into pressure and cancelled Joe Bob’s column. But there’s a happy ending. Joe Bob promptly went out and sold his column to The Dallas Observer. Not only that but Joe Bob started his own line of video releases. You can see him introduce such gems as Nude on the Moon, Suburban Roulette, and other drive-in classics at your local video store. And if that’s not enough to keep him busy, Joe Bob has got another poker in the fire. He’s an actor! In fact, you can check him out in Great Balls of Fire, Stephen King’s The Stand, Martin Scorsese’s Casino (he plays an incompetent casino dealer), and most recently in Face/Off starring Nicholas Cage and John Travolta.