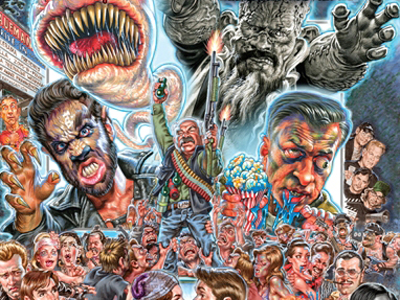 Chillerama is a collection of short films in the horror genre. It’s the closing night at the last drive-in theater in America and Cecil B. Kaufman, has planned a marathon of rare Ed Wood style B horror movies for one last shebang of his theater.

They say that the four films are so rare that they’ve never been seen before in America.

A poster on IMDB states that “Chillerama not only celebrates the golden age of drive-in B horror shlock but also spans over four decades of cinema with something for every bad taste,”

This is a movie for die hard horror fans whose interest extends farther back than 70s and 80s iconic films, “Texas Chainsaw Massacre,” “Nightmare on Elm Street,” “Halloween,” and “Friday the 13th” franchises.

This is for fans who truly love classic horror of the Bela Lugosi, Lon Chaney Jr, and Boris Karloff variety.