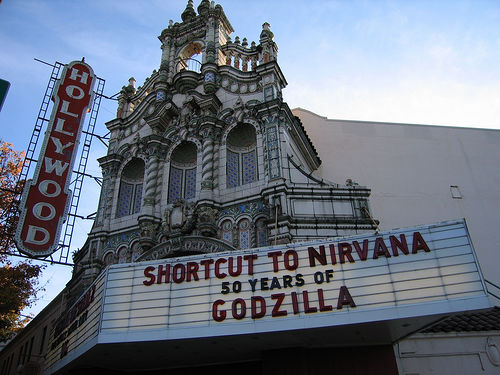 Not familiar with any of the awesomely low-budget and outrageously campy B movies filmed in Portland in the 1970’s through the early ’90s? Then you must go to the Hollywood Theatre this March to witness “Mean Streets PDX: A History of B Movies Filmed in Portland,” hosted by local filmmaker and critic David Walker.

Walker will present a collection of trailers, clips, and commentary that showcase Portland’s obscure and rarely seen B-movie past. A chance to revel in all of Portland’s spectacularly bad, B-movie glory!

“Rockaday Richie and the Queen of Hop,” which was released under the title “Stark Raving Mad,” and directed by George Hood, is based on the 1958 murder spree by the teenaged Nebraska couple Charles Starkweather and Caril Anne Fugate. Starkweather and Fugate were portrayed by Portland actors Russ Fast and Marcie Severson.

“Unhinged” is a slasher flick shot at the Pittock mansion, and “Ironheart” is a terribly acted karate movie. Yes!

“Brain Smasher…A Love Story:” a straight-to-video action-comedy-extravaganza, starring Andrew Dice Clay and Teri Hatcher… from 1993. How could you not want to watch it?

“Mean Streets PDX: A History of B Movies Filmed in Portland” is a one night only event that will take place on Tuesday, March 20th at 7:30 pm. Tickets are $7.