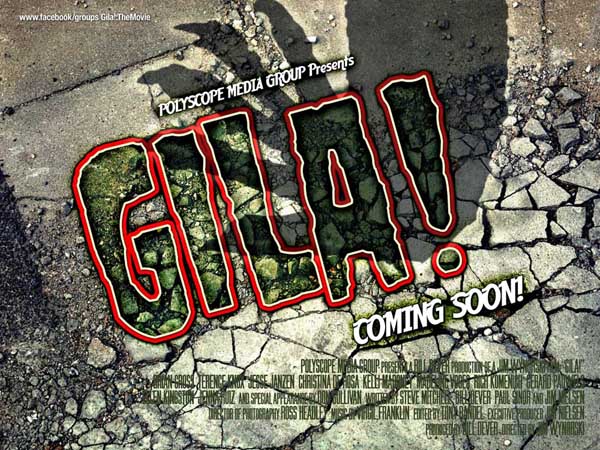 I grew up on Saturday afternoon and nighttime television reruns of scary movies. And science fiction always remained a favorite.

At the time, I had no idea films were lumped into categories, and some of my viewing usuals definitely were never going to win an Oscar.

This is the grouping of films affectionately known as “B-movies.”

So when I heard that Franklin, Ind., played host to the filming of a remake for the “so bad it’s good” movie dedicated to the slow-moving Gila lizard of the desert sands, I was excited to pass on the news.

Polyscope Pictures’ version is called “Gila!” and described as a “sci-fi comedy movie” scheduled for release in theaters and drive-ins nationwide.

This remake just finished shooting in Franklin, Ind., which is 20 miles south of Indianapolis.

Dever advises “it’s not all the monster’s fault since his giant size and voracious appetite come from accidental toxic chemical contact.”

He also notes that “beneath the action,” “Gila!” carries “a few contemporary political, social and environmental messages.”

Directed by Jim Wynoski, the movie follows a small-town sheriff and a young hot-rod mechanic as they suddenly face this giant lizard’s surprise attacks, which are first on farm animals, then hapless humans, a passing freight train and then a small Indiana town busily preparing for the big Christmas rock ‘n’ roll dance.

“It it features some of the best music of the 1950s and some cool cars.”

The antique hot rods and classics were provided by a Midwest car club.

It’s scheduled for theater release in August and stars veteran television actor Terrence Knox (“Tour of Duty” and “St. Elsewhere”) as the sheriff.

The handsome Chase is played by Brian Gross (“Red Tails”) who races, then rallies with restless hot-rodder Waco Bob played by Jesse Janzen and seductress Carla, played with a passionate zing by Christina DeRosa as they join forces to fight this scary, scaly creature.

He says it’s clever effects to convey the dangerous man-made chemical spill that helps morph his harmless reptile into a monster and cave crickets into chickens.

Tracked down and annoyed by the sheriff’s nitro explosion that supposedly sealed the cave, the monster breaks through by morning and wreaks havoc.

“Town drunk and civil libertarian Compton, played brilliantly by Rich Komenich, saves the day with a bottle of whiskey in one hand and the Second Amendment in the other,” Dever said.

Gerard Pauwels plays the classic rich, blowhard mayor who is forced to face the realities of city leadership as he, the sheriff, the hot-rodders and town drunk pull together to fight the monster.

Veteran actor Don Sullivan, who starred in the 1959 original film playing hero Chase, even returns to play this film’s scientist.

“Gila spit, as we all learned in junior high science, is bad,” Sullivan warns.

Writing the film was also fun because of the camp value.

“I grew up watching these fun movies” said Jim Nielson, co-writer and executive producer of “Gila!”

“We made ‘Gila!,’ well, because we really want to make movies fun again.”

In the end, the hero Chase gets good girl Lisa, played by what Dever describes as “a stunning debut by Madeline Voges,” and the town survives.

“Sadly, it comes at the expense of some quirky farmers, played by Jim Hardin and Judy Crippin, a cougarish Deputy Wilma played by Kelli Maroney and other nice neighbors and actors hired to be eaten in gory movie matinee fashion,” Dever said.

“Missy, the lovely and stricken polio girl brightly is reprised by newcomer Jenna Ruiz. ‘Gila!’ shows how a loving family led by Mom Winstead, played by Ellen Kingston, overcomes their disability with the help of the family horse.”

He also said for those who see movie theaters as “pure date night,” Dever believes “the soundtrack alone is worth the ticket.”

He said it features “cutting-edge rockabilly groups,” anchored by MG and The Gas City Three, joined by Bobby Day, The Take-Offs, Sandy Nelson, Link Wray and many more.