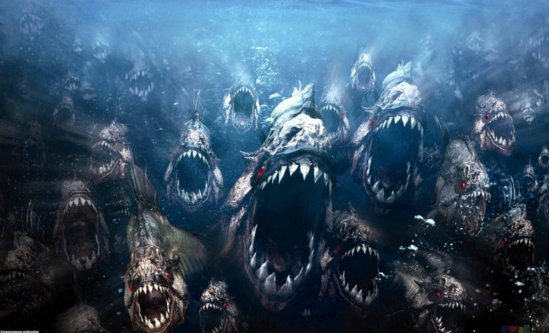 The original Piranha, released in 1978, was a very good, low budget Jaws rip-off that was Steven Spielberg’s favorite take off on his shark classic.

It helped launch the career of Joe Dante, who went on to direct The Howling and Gremlins, and acclaimed indie filmmaker John Sayles (Return of the Secaucus Seven) also gave the film a smarter screenplay than the usual B movie fare.

And of course, it also helped launch the career of James Cameron when he directed the sequel, Piranha II, which he always joked was the best flying piranha movie ever made.

Piranha was of course remade in 3D, and it was clear it wasn’t meant to be taken real seriously. It is pretty clear that you’re not supposed to take the next one in the series, Piranha 3DD, real seriously either, especially considering it’s got a cameo from David Hasselhoff, and it takes place in a waterpark, just like that other immortal killer fish classic, Jaws 3D.

As the Hollywood Reporter informs us, Ving Rhames is back with machine guns attached to his leg stumps to fight the deadly fish again, and like any true B movie, it’s got plenty of blood and nudity.   Although the ads promise “Twice the teeth, Twice the terror,” it also plays on the Jaws 2 tagline, “Just when you thought it was safe to put on your 3D glasses.”

If Piranha 3DD turns out well, it should be a fun popcorn B movie with decent jumping out of the screen effects, T&A, and wink-wink, nudge nudge cameo fun. In other words, like the famous saying goes, it is what it is. Look for Piranha 3DD sometime later this year.