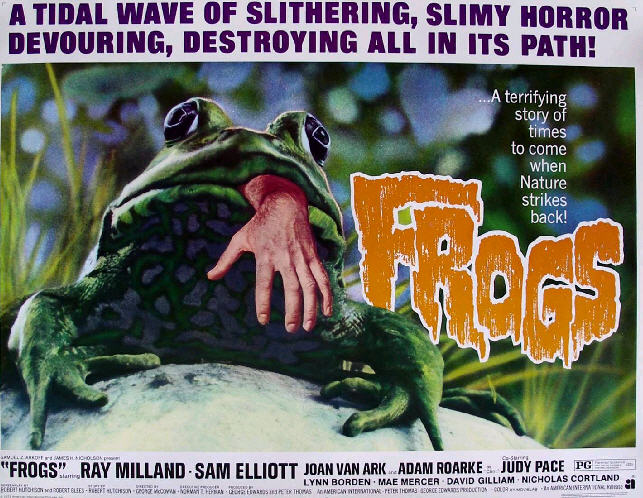 Frogs revolves around an environmentalist named Pickett who is canoeing off some island in some unknown location. He is documenting the animals, as well as the trash floating upon the water. Pickett’s canoe is duly capsized by a speed boat, and rendered unusable. The boat driver tows it back to his home, and it is here that the bulk of the movie takes place.
Island of Frogs (Spoilers Ahead)

The island is being overrun with frogs and other creatures that seem intent on killing all the people, supposedly as a revolt against the destructive activities of humans. This also happens to coincide with the birthday of the elderly Jason Crockett, the holder of a vast family fortune. His children, as well as his grandchildren, are all present and preparing for his birthday celebrations.

Almost immediately, people associated with the Crockett family begin being killed by the animals on the island. Pickett suggests that the remaining people leave the island. Jason refuses and demands everyone stay, only to see even more people die. Eventually, Jason agrees to let a few leave the island, including his staff. But by now, the threat has spread and those who had believed themselves to have escaped to safety also end up very dead, though off camera.

Pickett takes one of the surviving Crockett’s, the two grandkids and leaves the island. Getting into a car by hitchhiking, he leaves Jason to be killed by the animals on the island, alone just before his birthday draws to an end. Then the credits roll, ending the movie.
Frogs: B-Movie Badness

There isn’t much plot to the movie. Animals attack people, people proclaim superiority over the animals, then people flee for their lives from the island. Though where the movie fails is in fact far more interesting than the plot itself.

From the start, you know that you’re in for a treat. The photos Pickett takes with his camera magically contain the opening credits once the shutters close on the lens. This was a rather interesting way to open the movie, though four minutes of Pickett in a canoe taking pictures while the credits rolled was a bit tedious. Kudos for that Frogs.

The only actor actually acting is Sam Elliot, who plays Pickett. Though there are moments when Jason Crockett, played by Ray Milland, does actually remember that he’s an actor. The dialogue is painful in places, feeling rushed and emotionless. Even the way people react to situations seems vastly underwhelming, removing any notion of suspense or drama that the movie may have attempted.

Once on the island, you learn that Jason Crockett is not a man to be trifled with. He controls his adult children with an iron fist. The children do exactly as they are told, when they are told. This adds plausibility to why it is that so many people have decided to remain on the island, despite the fact of so many family members turning up dead.

Do you love the sound of croaking frogs? If you don’t, you’ll hate this movie. Every scene has frogs over the dialogue and in the background. Even when the characters are indoors, you’ll never be far from a croaking chorus.

Most of the deaths are caused by lizards, snakes, baby gators, spiders and Spanish moss. Yes, Spanish moss, even a plant is capable of killing a person in this movie. Though, perhaps surprisingly, the only person whom the frogs actually kill is Jason.

Don’t expect anything unique in the deaths. Standard deaths coming from ‘Poison’ brand poison, and animals swarming the films hapless cast-members to death.

The island contains scorpions, rattlesnakes with no fangs, tarantulas, ball pythons, black mambo snakes and asps, in this random menagerie of a swamp (An eclectic combination of animals that would never be found together in this environment).
Frogs: Not Without Fleeting Kudos

We’ve all watched horror movies, watched them parade out the cast, and figured out who would die very early. Usually if you’re a busty blond woman, a minority or a geek, you die. Though if your name is on the movie poster, your odds of survival are usually pretty high. This movie kills off the majority of the cast, but the order is unique. Kudos to Frogs for going against the norm of Hollywood horror films.

The movie should have ended with Jason on the island and with Pickett, the grand-kids and the daughter getting into a car and driving away. Instead, the movie finishes by showing Jason’s demise. Three thousand frogs against one old man in a wheelchair. The scene was unnecessary and ultimately pointless.

How about some random scenes that just made no sense, or showed a lack of effort on the movies makers part? A woman screams at a tortoise. There’s a snake that growls like a cat. There’s a scene where a snake is in the dining room, and Jason shoots it. The snake doesn’t explode or bleed on the white table and settings. Be warned, these types of excesses are par for course when attempting to wade through “Frogs”.

There are some parts of the film that are worth watching, as well as some of the most interestingly bad lines ever to be put on film. If you like bad movies, then definitely check Frogs out. You wont be disappointed.