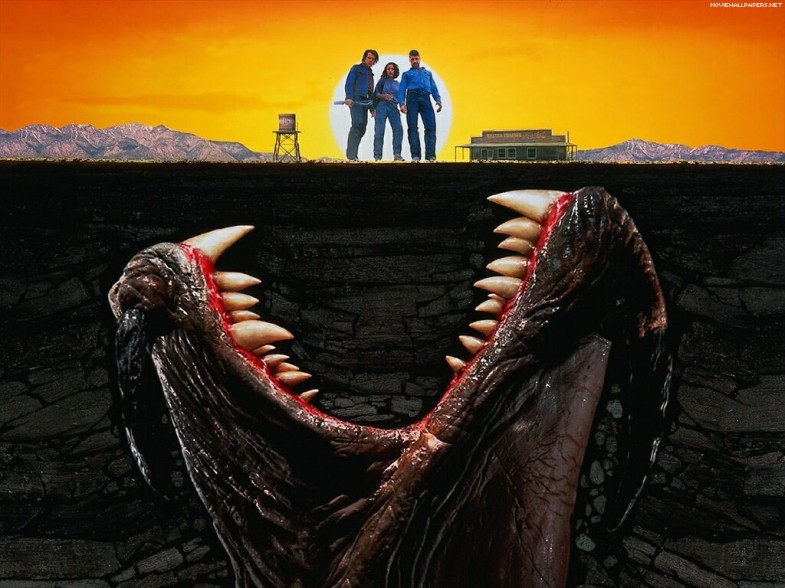 Tremors is often described by many to be a cult classic, which is odd. The fact is, cult films usually have a quirky quality to them that separate them from the usual Hollywood-churned machine. Take Re-Animator, for example, or even the recent Ravenous, both of which have oddities and bloody quirks that average viewers might find repellant. But Tremors isn’t the slightest bit offbeat. It’s made in full Hollywood-style with a predictably happy ending to boot. So what makes it a “cult classic”? Could it be that it’s successful in mixing almost every genre into the proceedings or that it’s great entertainment that simply didn’t get the box office reception it deserved? Perhaps both, because this is one movie that always puts a smile on my face and simultaneously gets my pulse-pounding every time I watch it.

The plot is similar to that of the monster films of the old days. Valentine Mckee (Kevin Bacon) and Earl Bassett (Fred Ward) are two handymen “trapped” in the small town of Perfection, Nevada. They have dreams of making it big, but their ambitious goals always seem out of reach. Just when they do decide to finally leave, the discovery of dead bodies, both human and animal, keep them there for just a while longer. There’s also the road, which has been blocked by a large boulder.

On hand to study some strange seismic activity is Rhonda (Finn Carter), a grad student who helps Mckee and Bassett come to the realization that both the deaths and the odd vibrations in the ground are connected. It turns out to be the work of giant 30-foot worms, four of them to be exact, and they trap the townspeople of Perfection in their homes, including gun-happy, WWIII-prepared couple Burt and Heather Gummer (Michael Gross and Reba Mcentire). The rest of the film becomes a desperate scramble to outsmart the worms and get out of the town alive.

The first thing that’s noticable about Tremors is probably how it’s obviously inspired by 50’s monster flicks. The great thing, though, is that Tremors plays itself as a comedy, preferring laughs over scares, a wise decision since if the film took itself seriously, it would have been a major detriment. The laughs aren’t cheap, either, as they result from witty dialogue and new twists on the “monster” subgenre. The great chemistry between Bacon and Ward brings the most humor to the film. Playing best friends with little education but plenty of smarts, these are two performances that are a hoot to watch. It’d be great to see them in another film together again (too bad it didn’t happen in Tremors 2).

But in addition to the laughs, there’s also the action, which is frenetic and exciting. Director Ron Underwood gives the film a lightning pace and the 95 minutes seems to just roll by. The fun action consists of a lot of running and “get off the ground” moments. For the last 45 minutes, Tremors is almost full of non-stop excitement, and it’s surprising to see that the action never gets tiresome nor dull for a single moment. The movie isn’t scary or frightening at all, but with suspense and thrills this sharp, who cares (Besides, being scary is hardly the film’s intent.)?

It’s nice to see that this movie is not particularly gory or full of gratuitous violence. While I do enjoy gory violence when it fits the style and tone, it wouldn’t have been welcome here and the light-hearted feel that permeates Tremors is a crucial reason to its success; there’s no unneccessary unpleasantness and it also proves that the movie creates genuine excitement without resorting to splashing blood all over the screen. Because of this, it easily reaches out to a larger amount of viewers, making it a movie that’s just as easily accessible for fans of, say, screwball comeides as it is for action lovers. Since the movie is PG-13, there are still a couple of moments of semi-graphic violence, but nothing objectionable to someone 10 years or older.

The special effects are fun, with the worms as the film’s showpiece. Thankfully, there’s no overdone CGI and the worms are actually well-rendered and convincing. But I must say, I was a little misled, seeing how it is the worms don’t actually look like the one on the video box cover (which actually looks cooler). But never mind that, I’m wondering how the director managed to pull off so many scenes of the creatures popping out from underground. I mean, given the fact that this is a goofy monster movie, it couldn’t have been given a very big budget. I also love those worm POV shots, particularly the ones that actually feature the camera wading through the dirt.

S.S. Wilson and Brent Maddock’s script is clever without being particulary intelligent or distinguished. This isn’t a brilliant film by a long shot but it goes to show that some writers who just want to write a fun script can actually get the job done. It’s a little odd to note that all of Wilson and Maddock’s other screenplays (with maybe the exception of Tremors’ own sequels) have been pretty bad, culminating to the debacle known as Wild Wild West. Unlike that film and the others they’ve written, this one isn’t soulless.

But it’s not the action and the laughs that put this film above so many countless movies of the genre. It is, after all, the characters that make this film as highly entertaining as it is. As said before, Kevin Bacon and Fred Ward’s chemistry is natural and they deliver some of their best acting in their careers. It’s actually a shame that Ward never reached the same heights of stardom as Bacon; he sure as hell had the charisma and acting skill for it. Also very good is Finn Carter as Rhonda, and it’s also a little unfortunate her career hasn’t gone far since this. She and Bacon also have some nice chemistry, which further establishes this movie as one that also works partially as a romance (a good feat, considering it’s not even striving to be one). The other standouts are Michael Gross and Reba Mcentire as the gun-toting couple. Their performances are a lot of fun and there’s a hilarious scene involving the two of them trying to kill one of the giant worms in their basement.

Tremors wasn’t much of a box office success but has since gone on to have a strong life on video, to the point where it even inspired other knowingly goofy creature features such as Anaconda, Lake Placid, Deep Blue Sea, and Deep Rising (of these three, only Rising comes to mind as a must see). None of them managed to reach the heights of Tremors, perhaps because their characters weren’t as likable and memorable, thus leaving this film as the one all future monster films will be compared to. The film’s also got its own sequels, the first of which I remember as being pretty fun but certainly inferior. Tremors 3 I have yet to see, but it’s one I’m looking forward to.