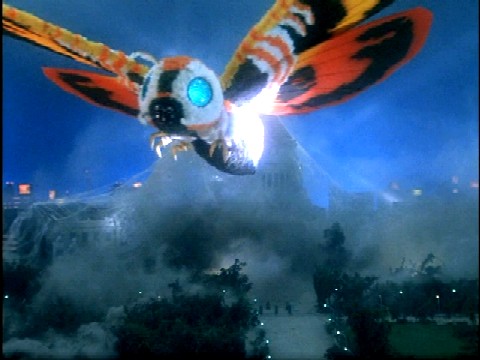 With the rampaging Godzilla decimating half the countryside of Japan, a small band of reporters journeyed to Infant Island in hope that the Shobijin will hear their pleas. Their calls almost went unheard though, because of the interference of the island natives. They were extremely reluctant to let them see their beloved goddess after humanity’s lack of cooperation in returning Mothra’s egg, which had washed ashore on Japan. However, the gigantic deity summoned for them, and through the communications of the Shobijin, an agreement was brought. Mothra, though weak in her current state, would journey to Japan to face Godzilla. Unfortunately, if she did leave, and was triumphant, she would not have the strength to return. So, lifting from her cavern shrine, the monstrous insect carried the prayers and wishes of the world on her wings.

A few days passed before the angelic monster reached the mainland and forced a war with the roaring nuclear menace. The adult Mothra fought, and dragged the reptile from her uncaged egg. Her children would not fall prey before this murderer. Few witnessed the selfless struggle that Mothra gave Godzilla that day. The deity used every weapon in her arsenal, but still could not prevail. Only after having her wings burned did the goddess retreated, flying back to the demolished Happy Enterprises and coming to rest on her egg in a final bid of strength. Mothra, the benevolent deity, was now dead. It was up to her flesh and blood kin to finish what she started.

Years followed the events in 1964 before another adult Mothra was born. Again, this goddess was found living on Infant Island, overseeing her worshippers with benevolent kindness. However, trouble was arising, as a group dubbed the Red Bamboo Organization had been abducting members of her people and forcing them into slavery for their needs. The remaining populace prayed, day and night, for their living symbol to go and save them, and, as Mothra awoke, their prayers were answered. Letchi Island, the home of the international terrorist group, became a battleground for a raging three-way assault, as Mothra arrived shortly after Godzilla had dispensed with the mutant Ebirah. Having previously fought alongside the nuclear menace against the space demon King Ghidorah, Mothra did not wish to engage Godzilla in battle. However, the King of the Monsters ventured too close, and blasted the nearby Earth with his atomic ray, calling Mothra to fight back the monster for the sake of her people, who now rushed to finish their makeshift basket. The battle was swift, as Mothra quickly toppled Godzilla with one stroke of her mammoth wings. With the nuclear menace temporarily taken care of, the goddess returned to the attention of her people, clutching the vine crate that they had constructed, as she whisked them away to safety before the Red Bamboo’s self destruct mechanism could go into effect.