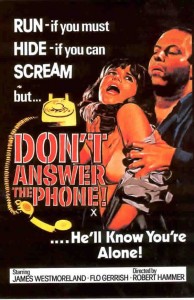 Some of the old Grindhouse movies leave you wanting to take a shower after it’s all said and done. Many of the films of this nature (“Maniac”, “The Toolbox Murders”, “Don’t Go in the House”) are just ugly beasts. They are vicious, questionable, possibly misogynistic, and all around scuzzy, like a man trying to pick a fight with you. Yet, several of these movies have an undeniable edge to them, thanks to strong performances, a pervasive, dread filled ambiance and a look and professional feel to them. One of the movies of this era that almost joins the ranks of these movies is Robert Hammer’s nasty but all around flawed 1980 film “Don’t Answer the Phone!”

From the get go, “Don’t Answer the Phone” is a rough little movie. It’s not the goriest movie, but the murder scenes are queasy, voyeuristic and all around sadistic, making the viewer feel very uncomfortable, which is clearly the intent. That out of the way, Worth does a great job as the psychopath. A veteran character actor, he really bites into the role, creating the portrait of a man you wouldn’t want to run into for many reasons. Byron Allred contributes a great old school electronic score which complements the sleazy proceedings quite well.

Sadly, that’s were the good aspects end. The movie ends up suffering from several flaws, such as the misplaced comic relief. For a movie that wants to provoke and offend sensibilities so much, it almost feels like it’s afraid it will go too far, and ends up using poorly timed comic relief to pad things out. It also doesn’t help that the other performances are pretty weak, and don’t really offer anything as far as characters are concerned. Gail in particular is a weak character-a stereotypical, weak liberal type who doesn’t stand a chance without the help of the more conservative cop characters. Even the direction feels lackluster. While other movies of this nature were pretty questionable, they at least felt like they were under capable hands. This just feels like a jumbled mess from a director whose unsure of himself.

In the end, “Don’t Answer the Phone” is a movie caught between two worlds: it wants to be a grim psychological study, but it doesn’t seem very sure of itself. It’s an ultimately uneven viewing experience that might be of interest to those curious of what kind of movies played in the likes of 42nd Street back in the day, but if you already know what kind of exploitation fair was shown back in the day, then you probably don’t need to see this, as there are better examples.