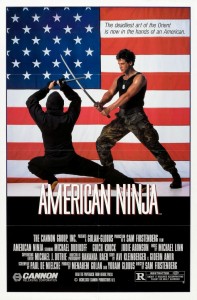 Ask a thousand people what the greatest unintentional comedy of all time is, and they will almost invariably tell you Battlefield Earth or Plan 9 From Outer Space. They’re wrong. American Ninja has those two turkeys beat down for a number of reasons, not the least of which being a script that was quite clearly not thought through. While I fully support the B picture industry for keeping slobs like Michael Dudikoff in work, a little work on the product would have gone a long way.

For those who give a rat’s posterior, my next few paragraphs will give away significant parts of the plot.

First of all, when we are given some background information on the titular hero, we are told his date of birth, next of kin, parents, and so forth, are all unknown. I don’t know about you, but I expect the US army to take fact-finding about its personnel a little more seriously. They also manage to screw up the continuity of dates quite effectively, although I don’t remember quite which dates were screwed up and when. This is actually one of American Ninja’s less obvious flaws.

It has been pointed out before, but a common failing of many martial arts films is that when our heroes are confronted by large numbers of antagonists, said antagonists attack one at a time. More recent films such as The Matrix Reloaded defy this convention, but just about every film from the 1980s has the audience screaming, “hey, why don’t you attack all at once???”. Martial arts films tend to be a lot more impressive when the fights are more extensive than one-on-one.

The central premise was originally a joke, but in light of recent events where the US army cannot crush a mob of insurgents simply because they won’t delegate to the specialists, it seems strangely ironic. Phillipino renegades are stealing weapons from the US army’s local division for sale to wealthy clients. Never mind that such a theft would prompt the army to give the local businessmen responsible, or even believed responsible, an aerial rectal exam, this is a cheesy 1980s action film, after all.

By far the funniest part of the film is the climactic battle, however. As Joe and Jackson turn combining posing and fighting into an art form, evil Ninjas start to explode for no readily apparent reason. I agree with one previous commentator in that this film should have been called Ninja Holocaust, because I’m willing to bet a total of at least three hundred evil Ninjas bite it during the film’s running time. On top of that, the Black Star Ninja starts fighting with rocket launchers, laser beams, and all sorts of ridiculous implements that are not only poorly thought out, they’re flat-out poorly executed. You’ll never see a laser beam effect that looks cheaper.

What tops it all off is that the film takes itself so damned seriously. During the scene when Joe is meeting up again with his old mentor, I dare the viewer not to laugh at the hideous dialogue. Not that I know any modern practioners of Ninjitsu, but the logical part of my imagination has a hard time believing that they have spoken like this at any time in their history. During this mentoring scene, I half expect the old guy to tell Joe he must prove his manhood by cutting his own head off with a blunt plastic spoon.

In all, I gave American Ninja a 1. This is a special score in my system in that it is reserved for the worst, most appalling, most offensive films I’ve ever seen, or films that make me laugh without even bothering to try. American Ninja is definitely an example of the latter.