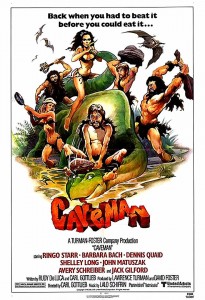 Like airline disaster movies, one staple of 1970’s cinema that was ripe for spoofing was the sub-genre of pre-historic melodrama influenced by “Korg: 1,000,000 B.C.”(1966). Enter, “Caveman,” a movie as willing to stick it to this genre as “Airplane!”(1980) was willing to do so to the Airport series, and countlessly similar movies and made-for-TV movies. You won’t exactly find humor on the level of Monty Python’s Flying Circus, The Young Ones, or Daria here, but it’s still good for some laughs.

Atouk(Ringo Starr) has a huge crush on his tribal leader’s wife Lana(Barbara Bach), but even if he didn’t he’s severely mistreated by Tonda(John Matousak), just because he can do so. Tonda is a huge thug who’d rather allow his fellow tribe-members to get eaten by numerous dinosaurs(which they call “Machas”), than try to save them. After he tries to “zug-zug” with Lana, he’s kicked out of the tribe, and on the way finds Lar(Dennis Quaid) who was previously left to die after being injured fleeing a Macha.

Along the way they run into Tala(Shelly Long) and her blind father, Gog(Jack Gilford) who nearly drowns in a tar pit until Atouk and Lar save him. Tala immediately falls for Atouk, but he’s not interested, which is a shame because she was gorgeous. Shelley Long has never looked as good as she does here. If I were in Atouk’s position, I’d dump my aloonda for Lana and zug-zug Tala till she screamed like a Macha, and perhaps even afterwards. Evan Kim is interesting as Nook, the leader of the much more articulate cavemen, who are NOT all WASP heterosexuals of normal size, and and decides to join Atouk and his growing clan as they team up to eventually battle Tonda and his clan for both Ool(food) and pride. Atouk is admired by many other primitive people he comes across, partially because he discovers fire, chiropractic medicine, hallucinogenic plants, and rhythm, which is why Starr is perfect for the role.

The big disappointment here is the fact that the DVD has no translation card of the primitive language, which was originally offered to patrons of the movie when it was first released. At least they could’ve made a translation section as one of the special features. Other than that it was as silly as hell, and well worth seeing.