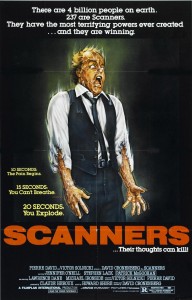 After a renegade scanner named Revok (a mutant human with advanced mental powers) causes another man’s head to explode, he is hunted by a second scanner hired by a semi-secret scientific organization. Meanwhile, other scanners are picked off one by one, and the hunter is left with great moral and existential questions — where did he come from, what is his purpose and is there a right or wrong side in this human/mutant battle?

Director David Cronenberg can seemingly do no wrong. As I watch one film after another of his, I wait to find one that is the pock mark on the perfect career. Some of his films (such as “Rabid” or perhaps “Stereo”) may be of less quality than others, but I have yet to find one that is outright bad. “Scanners”, for the record, ranks among his best and has become a cultural staple.

You know you are a culturally important film when you are referenced by “Wayne’s World”. But seriously, this film is a science fiction story that — like many science fiction stories — holds some greater cultural and moral issues worth investigating.

The issue of racism is here. Like the recent “X-Men” movies, and many other films, the idea of someone who is different in a superficial way (scanners look like ordinary humans) and is rejected raises the point that we as a society need to accept those who are not like us. Racism stinks, whether it appear in its purest form (skin color) or through religion or other means. And that is what makes this film so clever: the main character is a hero, but yet he is the outcast — in some ways we see him as being more human than those who would have him killed.

This also happens to be a film that focuses on one of Cronenberg’s strong points: his love of science. Or perhaps science gone wrong, if you will. Does any other director really tackle this as effectively as Cronenberg? I don’t think so. (Imagine what would happen if he started making a series of Philip K. Dick novels into films.)

I suppose I did not really get into the film itself so much, but the beauty of the film is that what you take away from it if you view it critically is so much more than the plot or effects or lighting. Yes, you have a great cast (isn’t Michael Ironside creepy?) and a head explodes. Yes, you have gun fights and mind control. Even a little bit of romance (but only just a pinch, nothing like a Goldblum-Davis connection in this one).