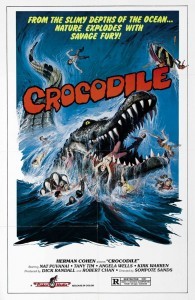 Eight College Students (Mark McLachlan, Caitlin Martin, Chris Solari, D.W. Reiser, Julie Mintz, Sommer Knight, Rhett Jordan and Greg Wayne) are taking a break from College for a vacation that means Party for these eight students. They rent a boat for the weekend that travels around the shore. A large female crocodile is been killing and eating civilians that goes near her eggs. When one of the students brings an egg with them. The crocodile goes where the students are and kill everyone college student until she gets her egg back.

Directed by Tobe Hooper (The Texas Chainsaw Massacre 1 & 2, Eaten Alive, Salem’s Lot) made a tongue in cheek horror film that is entertaining. There is likable performances by an unknown cast. The Late Harrison Young (Best Known for Saving Private Ryan and House of 1000 Corpses) has an supporting role as a sheriff.

Crocodile does suffers from a low budget production. The CGI effects are chessy yet the live action F/X by KNB Inc are more successful. The CGI effects are laughable. But Hooper makes things pleasant enough to make this enjoyable Grade B-Movie. It’s a pretty good direct to video. The film has one terrific scared that will make you jump or scream. Written by Jace Anderson (The Toolbox Murders-2003), Adam Gierasch (Mortaury) and Micheal D. Weiss (I Always Know What You Did Last Summer). From a Story by Boaz Davidson