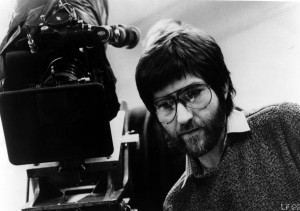 Before becoming a filmmaker, Tobe Hooper, a native of Austin, Texas, spent the 1960s as a college professor and documentary cameraman. In 1974, he organized a small cast that was made up of college teachers and students, and then he and Kim Henkel made The Texas Chain Saw Massacre (1974). This film changed the horror film industry. Hooper based it upon the real-life killings of Ed Gein, a cannibalistic killer responsible for the grisly murders of several people in the 1950s. Hooper’s success with “The Texas Chainsaw Massacre” landed him in Hollywood and it remains a horror-film classic. Hooper rejoined the cast of “Texas” and with Kim Henkle again for Eaten Alive (1976), a gory horror film with Mel Ferrer, Carolyn Jones, William Finley, and Marilyn Burns (who played the lead in “Chainsaw”). The film centered around a caretaker of a motel who feeds his guests to his pet alligator. Also in the film was Robert Englund, whom Hooper helped advance his career and worked with him again in the future. “Eaten Alive” also won many awards at Horror Film Festivals.

Hooper was assigned to the Film Ventures International production of The Dark (1979), a science-fiction thriller. After only three day, he was fired from the film and replaced with John Cardos. Instead, Hooper had greater success with Stephen King’s 1979 mini series Salem’s Lot (1979). In 1981, Hooper directed the teen-slasher film The Funhouse (1981) for Universal Pictures. Despite its success, “The Funhouse” was a minor disappointment. In 1982, Hooper found greater success when Steven Spielberg hired him to direct his production of Poltergeist (1982) for MGM. It quickly became a top-ranking major motion picture, despite some differences that were resolved by Spielberg himself taking over Hooper’s directing duties.

“Poltergeist” was perhaps a greater success than “Texas Chainsaw Massacre,” but it was three years until Hooper found work again. He signed a three-year contract with Menahem Golan and Yoram Globus’s Cannon Group, and directed more films, including Lifeforce (1985), the minor remake of Invaders from Mars (1986), and the disappointing sequel The Texas Chainsaw Massacre 2 (1986). Since then, Hooper’s career has gone downhill. He also directed two more Robert Englund films, Night Terrors (1993) and The Mangler (1995), in 1995 and he has also directed numerous horror television sitcoms. Recently, Hooper was asked to write a new script for Michael Bay’s remake of Hooper’s original Texas Chainsaw Massacre, which was released in 2003.