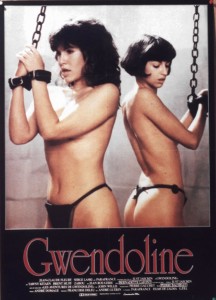 A simple rain shower signals the cast to strip naked. An S&M tribute to ‘Ben-Hur’s chariot race with human horses. And Chinese bar fights with midgets being impaled. If loving this is wrong I don’t want to be right.

“‘Barbarella’ Meets ‘Indiana Jones'” boasts the posters. NOT A SINGLE element of either film exists in ‘Gwendoline’!!! And I challenge anyone to name one!!! (other than Indy’s whip) This certainly has to go down along with ‘Dune’, ‘Blade Runner’, ‘The Crow’ and ‘Alien 3’ as one of the most visually stunning pictures ever made. The production quality is so high it just drags you right in and never lets go! It creates its own special universe where nothing else exists outside of it. The trailer is very accurate as to what you’ll be experiencing, eye candy with an S&M storyline.

If not for the visual masterpiece ‘Gwendoline’ would easily be relegated to just another sexploitation film.

First off, I watched this film only in French without English subtitles. This is a true test of any truly epic story. Can the audience understand the plot and characters even without understanding the words? The answer here is a major yes. The visual actions and emotions of the characters are so compelling we know them heart and soul even without knowing their names.

It reminds me a lot of ‘Land of the Deaf’ and ‘Quest for Fire.’ Bold films which intentionally created the challenge of having no dialogue what so ever. It worked for them and it works for ‘Gwendoline.’ This is actually how anime was originally screened is the US. Producers would show American kids anime only in Japanese. And if the kids could describe the plot and characters correctly they knew the anime film or series was worthy of an English language adaptation.

I’d accuse the story of being a plagiarized from an Anne Rice novel but her books like the ‘Sleeping Beauty’ trilogy were written after ‘Gwendoline.’ The plot is not complex beyond Westerners getting into bar fights in Chinese nightclubs, journeying into the Gobi Desert and discovering to lost S&M fantasy kingdom of Yik Yak. Not too complex but very compelling and exciting. And I’m not talking about just talking about sexual excitement.

There ending in the Gobi Desert could have at least been better with some implications that Yik Yak had entirely been a dream. This is what I was expecting as it’s very odd how all three of them are able to get dressed in the few seconds they have to flee the collapsing Yik Yak.