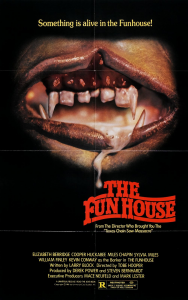 The production of this film included the use of a real vintage carnival from the 40s/50s. For anyone interested in the appeal of a traveling carnival, this film has some great sets. “The Funhouse” also features some great Rick Baker/Craig Reardon effects in the form of the movie’s “villain”, a deformed albino with fangs and claws.

But the rest of the production is sorely lacking. Tobe Hooper does his best with the material, but he’s not too good at smoothing over the obvious lack of logic inherent in the film. For instance, the plot concerns a small group of four teenagers who decide on a lark to “spend the night in the funhouse” of the traveling carnival they’re visiting…the same carnival that was around “when those two girls were found dead in the woods some time ago”. Now, why on Earth would anybody in their right minds find the idea of staying in a carnival funhouse overnight exciting? Where will they sleep? What will they do the next day? Won’t they get hungry? Thirsty? Have to brush their teeth? Use the bathroom?

Not only that, but the attractions in this carnival are most definitely not of the transportable variety. The titular dark ride seems so immense that our teen protagonists find it impossible to navigate their way out of the funhouse when danger rears its ugly head. Here’s an idea: maybe follow the metal tracks in the floor until you are standing at the exit? In fact, the funhouse is built like a permanent fixture, with at least two floors and what appears to be a sub-basement! How would the carnies ever be able to dismantle this thing and move it in one day?

This flick also suffers another blow by giving us nobody to root for. The teenage “protagonists” are wholly unlikeable. They smoke pot like they’re sipping soda out of a can, they steal money from strangers, they are stupid enough to want to spend the night in a carnival attraction, and they commit the unpardonable horror movie sin of fornication–all except for the female lead, of course, although she isn’t even interesting enough to be engaging. The dialogue in the film is flat, and it has no success in establishing any characterizations on behalf of the would-be victims. I wasn’t even paying attention to most of the film’s first reel.

“The Funhouse” is also one of those movies where the villains seem to know exactly where their victims will be standing, like directly on top of a trap door that is conveniently deployed right on cue. The machinery of the funhouse also knows exactly how to deposit dead bodies so that they will stop exactly in front of our screaming victims.

Suspension of disbelief aside, “The Funhouse” stirs up some uncomfortable feelings when the filmmakers use their “monster” to get scares out of the audience, then tell us he’s simply deformed. In reality, he is one of the only sympathetic characters in the movie, and the film’s climax is the only portion that packs a wallop: the script pits the only two characters in the film worth caring about against one another.

Hooper throws in some sly references to “Texas Chain Saw Massacre”, even if it does involve the gratuitous and illogical use of swinging hooks (haw haw), but by the time the movie delivers any real shudders, it’s too late. Ironically, Dean Koontz was hired to write a movie tie-in novel for “The Funhouse”, which was published under the psuedonym Owen West. Koontz fleshed out the story considerably, adding some great touches that the filmmakers would have been wise to exploit in their own movie. Too bad, because Koontz’s treatment may have given Hooper a bigger, sharper hook on which to hang this film.