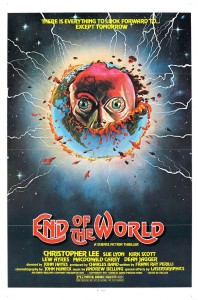 After witnessing a man’s death in a bizarre accident, a coffee machine explodes sending him through a window and into a neon sign where is electrocuted , Father Pergado (Christopher Lee) encounters his alien double bent on world conquest and he then retreats to a convent . Meanwhile , a marriage formed by a scientist (Kirk Scott) and his wife (Sue Lyon) are investigating weird signals from beyond space , it leads them the convent where are some nuns and the Doppelganger Father Pergado who have malignant objectives .

This laughable below average Sci-Fi deals with an extraterrestrial invasion from outer space formed by aliens plotting to destroy the Earth while disguised as religious figures . It’s realized in a television style , terribly developed and slowly paced . This is a low-budgeted film and plenty of stock-shots about disasters and catastrophes . Protagonist duo is mediocre as Kirk Scott and the famous ¨Lolita¨, Sue Lyon , who had a bad career . Stoic and serious acting by the incombustible Christopher Lee , still today successfully playing , such as ¨Dark Shadows¨and ¨The Hobbit¨ . Support cast is very good , but really wasted , being featured by experimented veterans in brief interventions such as Dean Jagger as Collins , Lew Ayres as Beckerman and Macdonald Carey . Middling cinematography and electronic musical score by means of synthesizer , being composed by Andrew Belling and Joel Goldsmith , Jerry Goldsmith’s son . The picture was produced by Charles Band and absurdly directed by John Hayes . John was a writer, director, usually produced and edited as well as often penned the scripts for his films , and occasionally actor who made a wide variety of outlandish and obscure low-budget independent pictures throughout the 60’s and 70’s . John made his feature length debut with the interesting 1961 drama “The Grass Eater.” Hayes went on to make a diverse array of drive-in exploitation outings in such sub-genres as World War II potboilers (“Shell Shock,” “The Cut-Throats”), rowdy redneck romps (“The Farmer’s Other Daughter,” “All the Lovin’ Kinfolk”), sleazy crime fare (“Convicts’ Women,” “Mama’s Dirty Girls”), Terror (“Dream No Evil,” “Tomb of the undead,” “Grave of the Vampire” , ¨Garden of dead¨), low-brow comedy (“Up Yours – A Rockin’ Comedy” , ¨Five minutes to love¨), Drama (Sweet trash , Fandango) . John pops up in bit parts in the wholesome Disney family features “The Shaggy D.A.” and “Treasure of the Matecumbe.” His last directing credit was an episode of the horror anthology TV series “Tales from the Darkside.” ¨. ¨The End of the world¨ results to be his only Sci-Fi movie and is considered a bottom of barrel flick . It might be good for a few , for the Christopher Lee hardcore fans .