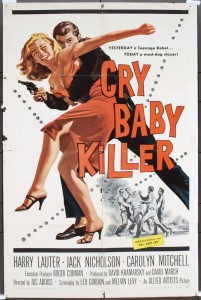 Recently, this viewer happened to watch, for the first time, the 1950 film “The Men,” historically important today as the screen debut of 26-year-old Marlon Brando. And by some strange coincidence, my next film, also seen for the first time, was the 1958 picture “The Cry Baby Killer,” whose only legitimate claim to fame today is that it marked the screen debut of the 21-year-old Jack Nicholson. The connection between the two actors, of course, is that they were neighbors for many years on Beverly Hills’ Mulholland Drive, as well as former costars in 1976’s “The Missouri Breaks.” And as reported on a certain Wiki site, Nicholson even purchased Brando’s home after his death, with the express intention of having the place torn down out of respect for Marlon’s memory. But whereas the Brando debut in “The Men” clearly demonstrated the emergence of a wonderful new screen talent, in an exceptionally fine film, “Cry Baby Killer” just barely hints at the latent possibilities that the young Nicholson harbored, and the film itself is…well, let’s just say that it is far from “exceptionally fine.” Indeed, even executive producer Roger Corman (who I had erroneously thought the film’s director, who had met Nicholson in an acting class, and who was on a two-month trip around the world as the film was being prepared) has gone on to say that “the finished movie is less than inspiring.” In truth, without Jack’s presence, the film would hardly be worth watching today, and yet…well, as will be seen, it still has some points to commend it to the viewer’s attention, and at a brief 61 minutes, can hardly be accused of overstaying its welcome!

In the film, Jack stars as teenager Jimmy Wallace, who, when we first encounter him, is in the process of getting the crap pounded out of him by a gang led by the suit-and-tie-clad Manny Cole (Brett Halsey). Later that evening, Jimmy enters the Klix Drive-In eatery, in which Manny presides like some kind of smarmy, thuggish demigod, determined to take back his girl, Carole (Carolyn Mitchell, whose only other film appears to be that same year’s “Dragstrip Riot”), from the older punk. A fight develops outside, during which Jimmy grabs a gun from one of Manny’s accomplices and shoots two of the toughs in the heat of battle. Thinking that he has slain the two youths (as it develops, he hasn’t; just wounded them in their intestines), Jimmy holes up in a shack next to the drive-in, holding a young mother and her baby, as well as an older black man, as hostages. And before long, a siege situation develops, as cops, spectators, relatives and a news crew gather, and Jimmy is soon being referred to as “the boy with the gun.”

Of course, the question uppermost in the viewer’s mind will probably be “Why doesn’t Jimmy just give himself up right away?,” but I suppose that if that were the way things logically transpired, this hour-long movie would barely have cracked the 10-minute mark. Rather, “The Cry Baby Killer” (an odd title, actually, given that Jimmy does not shed tears once and, as has been mentioned, is not actually a killer) treats the viewer to around 50 minutes’ worth of the head cop, Lt. Porter (Harry Lauter), questioning everyone at the scene, Jimmy’s parents and Carole begging the mixed-up nut via bullhorn to come out, and, most annoyingly, a newsman from KQQQ (!) repeating every incident that we have already witnessed for the benefit of the television viewers at home. Fortunately, we also get to see what is transpiring inside that shack, and thus are privy to Nicholson’s first on-screen rants, as he screams at the young mother to make her hungry baby stop crying. For all its brevity, the picture nonetheless seems to drag in parts, and indeed feels padded with needless scenes (the tentative romancing between cop Gannon and waitress Julie, for example). Curiously, the circus atmosphere that eventually develops at the siege site, with vendors selling hot dogs and Red Hots to the gawking crowd, is almost reminiscent of the situation that develops at the cave-in locale in Billy Wilder’s wonderful offering of 1951, “Ace in the Hole”; of course, “The Cry Baby Killer” should not even be mentioned in the same breath as that classic film. Besides Nicholson, only a few faces here will be at all familiar to most viewers: Ed Nelson as that TV reporter (Nelson also appeared in Corman’s popular schlock classics “Attack of the Crab Monsters,” “Teenage Cave Man” and “A Bucket of Blood,” but will probably be most recognizable to baby boomers by dint of his work on TV’s “Peyton Place”) and Herb Vigran as a shyster lawyer (Herb appeared as crooks no less than six times on TV’s “The Adventures of Superman”!). Oh…Corman is in there, too; a cameo as a TV technician whose only line is “Sounds OK!” And speaking of Roger, perhaps it would have been better for all concerned if he had indeed directed this film, as the work turned in here by Justus Addiss–who seems to have directed almost exclusively for ’50s and ’60s television–is pedestrian, at best. “The Cry Baby Killer,” to its credit, does feature a title tune that will likely work as an “earworm” in your head for many days. Composed and sung by actor and sometimes music writer Dick Kallman, this bizarre, repetitive number almost sounds as if it were being chanted by a beatnik, perhaps in a coffeehouse similar to the Yellow Door Cafe in “A Bucket of Blood.” This memorable tune, and the fact that this was indeed Nicholson’s first go before the cameras, are probably the two best reasons (possibly the only reasons!) for seeking out this otherwise forgettable film. At worst, it will inspire viewers to check out one of Jack’s later, better performances…such as masochistic dental patient Wilbur Force in the Corman-directed “Little Shop of Horrors,” for example. Now THERE’S a performance for the ages!