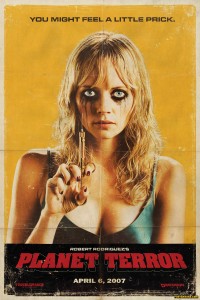 While Quentin Tarantino’s Death Proof seems to be a much more authentic representation of 1970s grindhouse pictures, Robert Rodriguez’ Planet Terror is more of a loving caricature of 1980s zombie splatter films. Nothing in the film is played straight, and virtually every scene is accompanied by a wink and a grin at the audience.

If Tarantino’s effort is accused of being slow (or deliberately paced, depending on your opinion), Planet Terror never even thinks about slowing down. From the exploitative opening credits through to the final frames of the film, this is a roller coaster ride of a film that doesn’t let up.

With Planet Terror, Robert Rodriguez continues his “everything and the kitchen sink” mentality when it comes to his film-making by throwing everything at the wall just to see what sticks. While it sometimes feels like this technique gets in the way of Rodriguez finding a true film-making voice, it works quite well for a film like Planet Terror where there’s no room for subtlety.

The cast that Rodriguez assembled is a glorious ensemble of bygone action heroes, horror icons, and Rodriguez stock actors. They all bring their parts to life in a cartoonish sort of way that fits the tone of the movie beautifully.

While the uncut DVD edition of Planet Terror doesn’t change the film drastically in any way, it definitely improves the film. It gives the film smoother transitions and fills in some gaps in the plot (though that missing reel is still there and will always remain there as one of the many comical winks at the audience). The large cast of characters are also given more beats here and there that help fill out their personas a little more. All in all, this uncut version simply allows the film to breathe a little more, rather than having to jump frantically from scene to scene in an effort to make the 84 minute running time.

At the end of the day, Planet Terror isn’t going to win any awards, and it’s certainly not meant to. It’s simply an extremely enjoyable guilty pleasure of a film that virtually anyone with the stomach for it can probably have a good time with, especially if you’re a horror fan. Take a couple of classic John Carpenter films like The Fog and Escape From New York and throw them into a blender with a couple of classic zombie splatter films like Evil Dead 2 and Dawn of the Dead and you’ve got a pretty good idea of what Planet Terror is like. And at the end of the day, you could definitely have a worse combination of films to pay loving homage to.