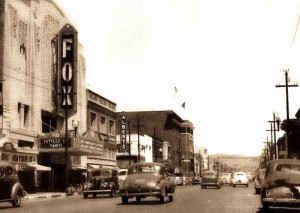 As of late I have been publishing articles on the state of the motion picture industry and some gentle perspective to give it a way out of the malaise it finds itself in. I have offered examples in other countries such as Norway and Argentina and have suggested that we all look towards the internet streaming phenomena as an inspiration for change. In times past the industry has drawn upon itself, and from it’s ranks a leader would arise to provide alternatives to the skewed structure that Hollywood offered exhibitors.

In the 40’s a California based exhibitor rose against the booking habits and production manipulation of Hollywood, and offered an alternative. Easy parallels exist today.

Robert L. Lippert has to be counted as one of the greatest pioneers the Motion Picture industry has ever produced. He was born March 11, 1909 and was left the same day on the doorstep at San Francisco Catholic Charities Orphanage. Robert was adopted 22 months later by Leonard and Esther Lippert of Alameda, California. Robert spent his youth growing up in Alameda. He graduated from Lincoln grammar school. Mr. Lippert left school at the beginning of his senior year in Alameda High School to elope with his high school sweetheart Ruth Robinson. Both of them were 17 years old.

He began working in the movies when he was 14 years old, playing the organ to accompany the pictures flashing on the magic screen. He later became a projectionist and cleaned up the theatre after the customers had gone. When “Talkies” were introduced by Warner Borthers in 1929, Lippert rented some portable new sound equipment and went on tour showing the new sensation in grammar and high school auditoriums throughout eleven of the western United States. This was a real showman.

From 1936 to 1940, to attract theatre patrons during the depression years, Mr. Lippert started selling and promoting “Dish Night” and “Book Night” across the entire United States. In his travels during these years, he met ninety percent of all theatre owners and motion picture distributors. The Robert L. Lippert Theatre Circuit started in 1942 with the opening of the Grand Theatre in Richmond, California. Mr. Lippert pioneered Drive-In Theatres in 1945, starting in Fresno, California. Combining in-door and drive-in theatres the circuit grew to 118 theatres

He personally produced 121 features between 1946 and 1955. In 1955, Mr. Lippert dissolved his distribution company and moved to 20th Century Fox Film Corporation as producer and executive producer to make and deliver a further 120 full-length features. Besides 20th Century Fox, he produced 4 additional motion pictures for Paramount, Warner Bros., United Artist and American International Pictures.

Some of his movies are the scifi classic Rocketship XM and the archetypal horror movie, The Fly. His other big box office hits include The Dog of Flanders, The Baron of Arizona, Valley Of The Eagles, Steel Helmet, Hellgate, China Gate, Desire In The Dust Little Big Horn, Tall Texan, Murder Inc., The Big Show and Cabinet Of Caligari.

In total Robert L. Lippert produced 246 full-length motion pictures from 1946 to 1966. His 20th Century-Fox production budgets were set at 10 million dollars per year for ten years. Lippert Pictures and Fox monies based on the gold standard of those years exceeded 125 million dollars. This was a lot of money vested in the judgement of one man.

Lippert is responsible for a host of our stars today having given them their first starring or break in the movies. Stars like John Ireland, Charles Bronson, Peter Falk, Jack Nicholson, Hugh O’Brien, Richard Chamberlain, Angie Dickinson, Julie Adams, James Arness, Raymond Burr and Lloyd Bridges.

Having spent better than 20 years in Hollywood and also building new and better in-door and drive-in theatres, Lippert returned to his home, Alameda. His first love of the theatre business has always been his theatres. In 1965, he went and built the first multiplex in the San Francisco Bay area.

Lippert passed away in 1976, in Alameda California of a heart attack.

Maybe it’s time that the smaller chains look a co-operatives of alternate product distribution. I was hoping that Open Road , the partnership between AMC and Regal would provide an alternate path for the industry but instead they have sought to mimic Hollywood and not provide an alternative to it.

Maybe it’s time for the industry to look within itself for a solution and follow Robert Lippert’s example.

Have A Happy and a Blessed Easter,