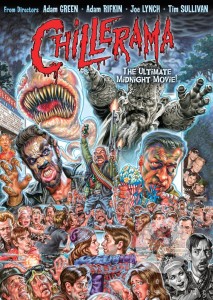 Chillerama is one great big homage to the drive-in films that were once one of the biggest ways to view a film. Now, we have midnight showings and regular movie theaters. Though the number of American drive-in theaters have decimated to almost the point of utter extinction, Chillerama proves that if this was the seventies, it would’ve been the main attraction.

This is an anthology film in the vein of things like Creepshow and Tales from the Crypt. It plays like true anthology goodness; several short stories and then a wrap-around story to conclude the spectacle, where all the characters come together, also making the narrative come full circle. I have rated all the segments on their own since they serve as their own mini-movie. I believe that it’s impossible to give one final rating to an anthology film without rating each individual vignette and then finding the average of the numbers. Thankfully, every one of Chillerama’s stories is of passable quality.

Since each short is directed by a different person and focuses on a different period of horror, it gives sort of an ambiguous presence off. We get the homage to the time period, and the director’s way of establishing it showcasing his style and his way of storytelling. Our first short just happens to be the best one. The Adam Rifkin directed “Wadzilla” is a crafty, creative, and endearing short mimicking the goofiness and the cheesiness of monster movies that dominated the fifties. The story focuses on a man, played by Rifkin as well, who has been giving a pill because of low sperm count. After taking this pill multiple times, he realizes his sperm have enlarged, and after one “escapes” from his body, it runs dangerously downtown, destroying everything in its path. Its jokes at films like The Blob are noticeable, and the idea itself is so unique and witty I can’t help but have an undying fondness for such a short.

The next short, while the weakest, still has plenty of flair and wit. It’s “I Was a Teenage Werebear,” a short that is supposed to lampoon Rebel Without a Cause, Grease, and The Twilight Saga. Funny thing is I didn’t think of any of those films when watching the short. I feel this is more a homage to beach movies and quirky musicals of the sixties and seventies. You know? Where characters randomly broke out in song and danced the night away. Beach Blanket Bingo comes to mind. As well as The Lost Boys, for its use of an unlikely clan and The Rocky Horror Picture Show for its bizarre costumes. I didn’t find the story all that exciting, as much as I did the little dance numbers and the overall vibe it shot through my screen. A fun little short, that’s too out there to be ordinary.

After that, we have “The Diary of Anne Frankenstein” directed by Adam Green, another director I’m well acquainted with. Green directed both Hatchet and its sequel, as well as the chilling, no pun intended, claustrophobic horror flick Frozen. Green furthers his style of flashback filmmaking with this short about Hitler (Moore) who breaks into Anne Frank’s attic and recovers her book about how there was a strange monster created in her family. Hitler plans to revive this monster in order to win World War II. The film is subtitled because of its German origin, and is shot in black and white. The short is supposed to remind us of strange, foreign black and white films that were popular in the twenties and thirties. This is another change of pitch for Green, and hopefully will continue his line of films that throw us back to a simpler, more involved time.

I forgot to mention that the shorts we are watching are being played in a drive-in theater in the film. There are a number of characters we become more familiar with between intermissions of the shorts. They all join together to fight a massive zombie outbreak in the closing short “Zom B Movie.” The short is similar to the outbreak in Troma’s film Poultrygeist: Night of the Chicken Dead, and mirroring the style of zombie films like Dawn of the Dead. This is beautifully directed by Joe Lynch, the same person who directed the great sequel to Wrong Turn.

If you’ve never heard of the company Troma then this film is worthless to you. You have to have a certain love for low-budget, throwback style filmmaking to develop the love for Chillerama like I did. I was rarely so involved in a horror film until I saw this and now I fear that I’ll be expecting this quality next time I see an anthology film. Green, Lynch, Rifkin, and Sullivan have all proved themselves worthy of making a good horror-movie script and an uncanny talent of handling a camera. Maybe if we have a Thrillerama at one point we’ll get more out of these four capable men.