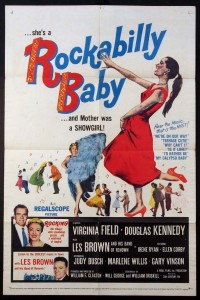 The mysterious Mrs. Eleanor Carter moves to Springfield with her two teen-age children Jimmy and Cathy. Eleanor makes friends with the town’s social leader, Mrs. Wellington, who supports her idea for a town youth center, and she is aided by Tom Griffith, the high school principal. At the town’s annual picnic, to which Eleanor has bought a band (Les Brown and His Band of Reknown), the town busy-body, Eunice, reveals what she had learned from Eleanor’s past.

This is must viewing for fans of two of TV’s most famous Grandma’s. Ryan and Corby are fun to watch in their non-grandma parts. Rockabilly fans, however, won’t find much “rock” or “billy” in Les Brown’s band. They can sort of swing, but they don’t come close to rockin’. Still, the music might be the movie’s strongest asset for the plot is pretty weak, and in the end you know things will turn out swell for the Carter family.

The best unintentional gag through the film is Gary Vinson’s character Jimmy Carter. Being that he and his sister are the new kids at school he is constantly introducing himself to the other students. “Hi, I’m Jimmy Carter.”