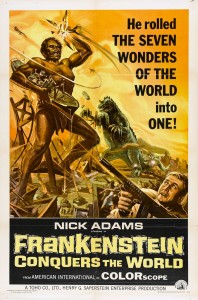 This 1965 Toho classic brings the reanimated corpse to the world of giant monsters and elaborate miniatures, an oddball idea. Believe it or not, Frankenstein was originally suppose to fight the likes of Godzilla at the time, but the concept was sorta dropped and instead Godzilla ends up fighting King Kong, Mothra, and Ghidorah. Without wasting the basic idea, however, Toho created this film and the result was “Frankenstein Conquers the World aka Frankenstein vs Baragon.”

Plot: During WW2, the Nazis deliver the still-beating heart of the Frankenstein monster to Japanese scientists in Hiroshima who plan to use it for medical purposes. However, the heart was presumed lost in the nuclear explosion that destroyed Hiroshima. Years later, scientists discover a strange wild boy running around and find out soon that the missing heart grew a new body resistant to radiation. With greater access to food in captivity, Frankentein grows rapidly and soon escapes. Then, mysterious, destructive incidents have occurred and everyone’s quick to blame Frankenstein. That’s not the case as it turns out that Baragon, a subterranean fire-breathing dinosaur, is the real culprit. Soon a battle between Frankenstein and Baragon commences and the fate of Japan hangs by a thread.

Overall, this is an interesting film. It’s pretty scientifically accurate and the miniature sets are fairly impressive seeing as how the monsters are smaller that their larger kaiju brethren. The story is also good and the music by Akira Ifukube is a real treat to listen. Frankenstein does look a little goofy with his buck teeth and unsettling shriek.

The monster that steals the show, however, is Baragon. Arguably one of my favorite monsters, Baragon has a great design, cool roar, and a nice set of abilities. The movie starts out a little slow, but once Baragon shows up things get pretty exciting, especially when Franky and Baragon have their awesome lengthy fight. They pretty much beat the living crap out of each other, making this one of my favorite kaiju battles.

This is a fun edition to Toho’s roster of creature features. Baragon became so popular thanks to this film that he actually now stars in a few Godzilla films and video games. If you’re a fan of giant monsters, then check this action out. I recommend getting the 2-disc special edition for this one. Enjoy!