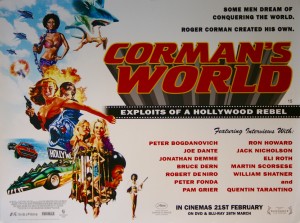 If you are my age or perhaps a bit older, than there’s an excellent chance you’ve seen several of Roger Corman’s films. If you are a young whippersnapper, then perhaps you haven’t. Regardless, he is an important man who all people who consider themselves to be cinemaphiles should know, as his track record of successful movies is unique. While he rarely had a decent budget, again and again, he managed to squeeze as much into the film as he could–and usually made them very entertaining. Some of the films are patently silly–such as his 1950s horror films–yet they are usually entertaining. Some of them are socially significant–and yet they are usually entertaining. The bottom line is that the films he produced or directed are NEVER dull. Bad, often…but dull, never!

This film is a tribute to the man and his films. You’ll see a lot of his actors and directors from years past (mostly not all that famous, but Jack Nicholson and Ron Howard are interviewed as well) as well as his wife–who helped produce many of his films. In addition, there are LOTS of clips. Overall, a very well made tribute film–one that infuses the viewer with enthusiasm for his work. Lovingly made, the part that surprised me the best was seeing Nicholson tear up when talking about the man! Well worth seeing and a must for any film student, as they could learn from his tight-fisted example!

By the way, of all the clips they showed, the best of these films must be “The Intruder” (with William Shatner). Surprisingly, this is one of the only one of almost 400 films Corman made that LOST money!!