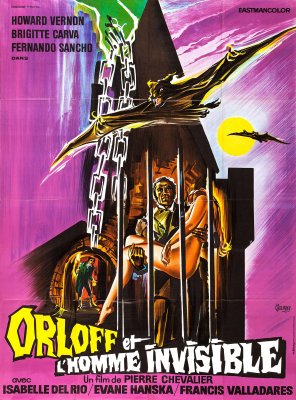 Apparently, the Orloff name was strong and universal enough to be dealt with by hands other than Jess Franco’s, who created him (like, say, Dr. Mabuse, whom the notorious Spanish film-maker eventually got to grips with himself). As for The Invisible Man, he would go into even wilder directions over the years from what H.G. Wells had envisioned in print and James Whale immortalized on the screen in his classic 1933 adaptation!

Incidentally, while the 1961 film that spawned the Orloff character unfolded within a period setting, the second (which was helmed by the same director but did not feature the actor best-known for playing the titular figure i.e. Franco regular Howard Vernon) was updated to contemporary times; this, then, takes it even further back than the original to the Gothic era (though belying this fact by accompanying the proceedings with incongruous jazzy rhythms, complete with finger snaps that half-promised the inclusion along the way of a Jets-vs.-Sharks skirmish)! While it would like to evoke the style of the series, the result is decidedly more low-brow than Franco had so far gotten with this character (incidentally, two other of the director’s efforts from this early phase, namely THE SADISTIC BARON VON KLAUS {1962} and THE DIABOLICAL DOCTOR Z {1965}, come far closer to the established formula) – for the record, I would like to check out Franco’s similarly-titled THE SINISTER EYES OF DR. ORLOFF and THE SINISTER DR. ORLOFF from 1973 (this was recently released on DVD) and 1982 respectively.

Anyway, here we get a young doctor (played by an actor who, apart from being bafflingly adorned in a Dracula cape, never once changes his facial expression, irrespective of what situation he may be facing!) being asked to the Orloff estate – and hilariously shunned off by the townsfolk when he dares mention the name, even the horseman who offers himself to take the hero up there – ostensibly to treat a patient (why he does not even bother to ask himself how come Orloff did not do this in the first place is anybody’s guess). However, it transpires that Orloff’s daughter had requested his presence (one wonders whether she got his name off the epoch’s equivalent of the “Yellow Pages”!) because she fears for her father’s sanity and her own life, as he seems to be involved in a weird experiment of some kind. Ironically, when he confronts Orloff, the latter not only expresses surprise at seeing the young man but claims that it is the girl who is unwell…after having been buried alive, robbed in her grave by their ungrateful servants, and stabbed by same when she interrupts their greedy labor by inconveniently waking up! While Orloff manages to imprison one of the culprits (“Euro-Cult” regular Fernando Sancho) in his dungeon, their layabout replacements prove not much better!

Still, things soon start to go bump in the night as the hero notices a book’s pages apparently turning by themselves (the heroine had already mentioned to him a curious episode in which she went before the mirror but could not see her reflection as something was obscuring it!). Orloff explains to the hero (whilst ordering his ‘creation’ to serve them coffee!) that he has found an invisibility serum and intends creating a super-race to take over the world (talk about a Five-Year Plan!). However, The Invisible Man turns out to be not only a rapist (ravaging Vernon’s new girl servant – cue gratuitous extended nudity: this is where it really feels like a Franco movie…big deal! – in the dungeon via zoom-happy simulation that actually anticipates Walerian Borowczyk’s notorious THE BEAST {1975}!) but not even human (as the heroine has the ingenious idea of sprinkling flour behind them while roaming the castle grounds so that they will know if the monster is in the vicinity but, of course, it never occurs to these twerps that he might be in front of them all the time – in any case, we get a fairly good glimpse of his hairy ape-like hide after one fortuitous flick of the white powder!).

Following this, the monster catches the leading lady and undresses her in a split-second (uncovering a veritable bush wherein birds could freely nest!). The ending, for what it is worth, has the castle go up in flames and Orloff ostensibly staying behind to destroy the Invisible Man – but the heroes, all cuddled-up outside, actually witness the monster emerge alone and be mangled (conveniently unseen) by a pack of dogs! At a mere 76 minutes, I guess the film (whose original title translates to THE LOVE LIFE OF AN INVISIBLE MAN, even if it was also released as THE INVISIBLE DEAD!) is tolerable but, at the same time, too dull – and clearly incompetent – to really entertain for the duration; finally, being the first film I have watched from this director, I cannot say to be anxious to catch more of his dubious gems any time soon…