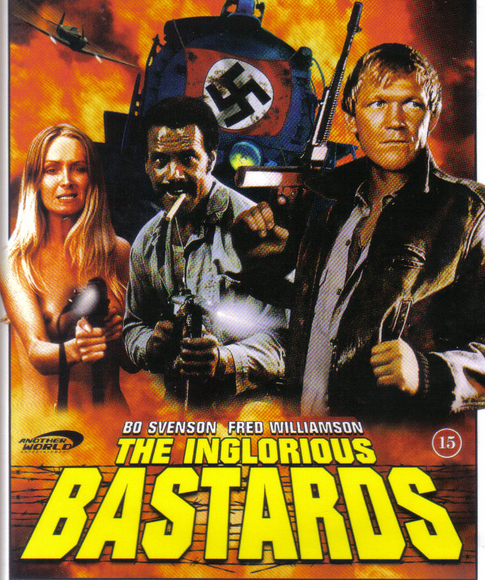 Bo Svenson stars as an American officer who’s thrown into a prison convoy with a murderer, Tony (Peter Hooten), Fred (Fred Williamson), a thief, Nick (Michael Pergolani), and a coward, Berle (Jackie Basehart). The convoy comes under attack by the Germans and the men escape across the French countryside. They enventually become wrapped up in an important Allied mission headed by Colonel Buckner (Ian Bannen).

The movie features a top notch cast. Peter Hooten is especially memorable as the bigot, Tony and Fred Williamson turns in a great performance. Bo Svenson, himself a renegade, still tries to do the decent job as an officer and keep these boys in line. Michael Pergolani has little to do in his role as the hippie/thief; he does have one great motorcycle stunt scene, though, a la Steve McQueen in THE GREAT ESCAPE. Watch for Michel Constantin (THE DIRTY HEROES) as a partisan leader; Donald O’Brien as a German officer and Enzo Castellari himself as a German officer.

The movie has some stunning action scenes; there are plenty of shootouts and explosions. The big gun battle amidst ruined German and American trucks and halftracks is especially impressive. The Partisan raid on the train near the end is well filmed, but features many repeated shots of the same action happening over and over again. The miniature work is not the greatest, but is much better than the later BATTLE OF THE EAGLES.

The plot is basically a combination of THE DIRTY DOZEN and BATTLE OF THE COMMANDOS, but it’s so fast-paced that you won’t really care. Castellari lets only a few minutes go by before something important happens. He really develops his lead characters, which is another important feature we don’t get to see much of in typical Italian war films.

Despite all of the good stuff, this movie has a few rough spots. For one thing, it’s got a very needless love story sub-plot that never goes anywhere and has nothing to do with the rest of the movie. Another complaint: there are some lengthy conversations between the German characters that weren’t dubbed. It’s impossible to understand what they’re saying.

The movie is not for young kids. It features graphic violence, plenty of profanity and even *full* female nudity in one scene.