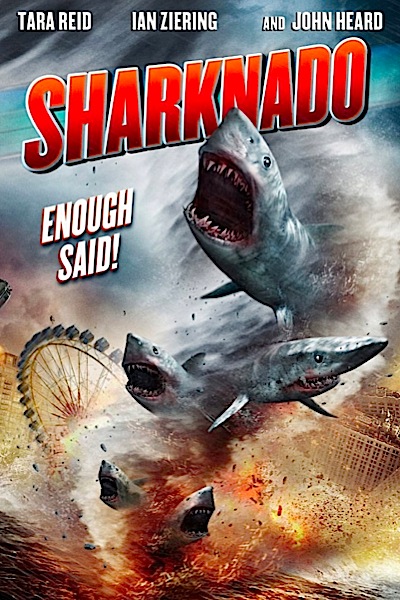 Regardless of genre, most movies are a construction of thoughtfully planned scenes, each of which presenting plot points and character motivations that, together, form a plausible narrative, allowing for the proverbial “suspension of disbelief.” Such careful craftsmanship is never more important than at a film’s beginning. The creators of Sharknado didn’t bother with any of that.

There is an opening sequence involving a fishing boat on a stormy sea. On board a greedy captain in a raincoat and an Asian man in a three- piece suit squabble about money (presumably for some nefarious service performed by the captain). Handguns are soon brandished, bullets are fired, and chomping sharks are washed on deck by the waves (à la The Perfect Storm). People are shot or eaten, and a massive water spout filled with digitally-rendered sharks stretches into the sky. Then the opening credits begin rolling, and it’s as if that scene never happened. Other than the brief preview of the “sharknado” to come at the end of the second act (yes, I’m taking some liberties by using standard film vernacular to describe this storyline), it was as if this scene was jumbled together from leftover footage of some other SyFy shark movie. Did this bother me? Nope. In fact, it wasn’t until after the movie’s end that I even remembered the ship’s captain and the shootout on the water. By then, I was still grinning too much to care.

One grin-evoking moment occurs when Nova, the leading female character played by Cassie Scerbo, stabs a shark to death with a cue stick in a bar. While this isn’t the first shark encounter for the protagonists or even the first shark-on-land encounter, it does seem to set the tone for the rest of the movie. Anthony Ferrante, the director, wants everyone to realize that this is not—and does not aspire to be—Jaws.

Though he need not worry about anyone mistaking this shark movie for Steven Spielberg’s classic, Ferrante repeatedly makes references to it. I won’t use terms such as “allusion” or even “homage” to describe these references. Perhaps “farcical” might be more appropriate, or maybe “comic relief,” but even those terms lend themselves to a more contemplative critique than I am attempting.

I think Ferrante’s purpose was to preemptively counter all would-be critics who might say things like “This is no Jaws.” He could have just titled the movie Another Killer Shark Film That Is Not Jaws. But that would have been too self-effacing and certainly not as much fun.

In carrying out this strategy, Ferrante doesn’t waste much time. Moments after the sharks begin plopping onto the streets and docks, Fin—a bar-owner, father and former pro-surfer played by Ian Ziering of Beverly Hills, 90210 fame—makes quick work of one by shooting a diver’s air tank that is jutting out of its gullet, causing it and the shark to explode. Remind you of anything? Yep, there’s even a corny one-liner: “That’s what you get for trying to eat me.”

Later we have a quasi-touching expository scene that reveals Nova’s pre-established hatred of sharks. The character of Fin’s son, Matt, played by Chuck Hittinger, notices an unusual scar on Nova’s thigh. To get her to talk about it, he lifts up his shirt and reveals a scar on his abdomen and explains its not-so-dramatic origin. When he asks Nova how she got her scar, she says she had a tattoo removed. Not buying it, Matt prods further and Nova tells a story about going fishing with her grandfather and his friends when she was a little girl. She says that their boat sank and sharks began to circle and attack them. The men managed to lift her out of the water and onto something floating nearby, but a shark still managed to take a hunk out of her leg. In summation, Nova says: “Six people went into the water and one little girl came out. The sharks took the rest.”

The scene in Jaws in which Robert Shaw’s character Quint tells the tale of the sinking of the USS Indionapolis is arguably one of the most memorable scenes in film history. Ferrante knows this. Nova’s scar story, in a tongue-in-cheek sort of way, serves to again make the director’s statement: “I am aware of Jaws, as is everyone in the civilized world, and this is not that movie!”

Later, this same point is made again, this time even more comically and pointedly. After fabricating some propane bombs, Nova and Matt take to the skies in a helicopter to hunt the tornadoes. Matt flies perilously close to one of the funnel clouds so that Nova can toss one of the bombs into it. She sees an enormous shark coming straight at them and declares: “We’re gonna need a bigger chopper.”

If you want to be moderately entertained, then I don’t think you will be disappointed with Sharknado. Don’t expect too much going into it—and bring with you a willingness to suspend your own sense of disbelief. Most important, keep in mind that this is not Jaws. I don’t think that fact will slip you mind, however. The director made sure of it.