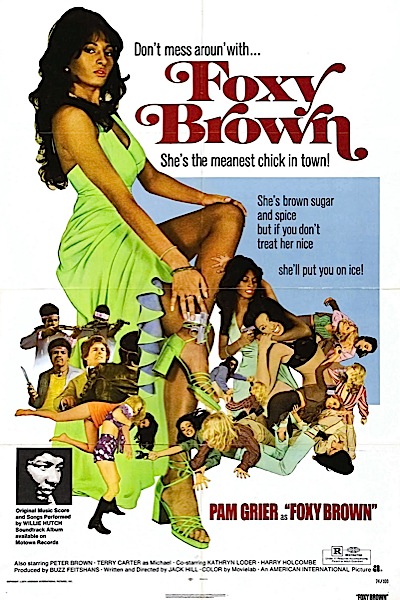 In 1973, the film “Coffy” made Pam Grier a star, a permanent icon of the blaxploitation films of the era, and a symbol of female empowerment in the face of racial tension. She also kicked a whole lot of tail. Writer and director of “Coffy”, Jack Hill, had finished a script for a sequel when the studio decided at the last minute that it didn’t want to film a sequel to “Coffy.” Re-working his script, Hill gave birth to what could arguably the seminal female blaxploitation film: “Foxy Brown.”

Foxy Brown (Pam Grier) is a strong woman striving for a better world. While she attempts to help her drug-dealing brother Link (Antonio Fargas) change his ways, she waits for her federal cop boyfriend Dalton (Terry Carter) to recover from plastic surgery designed to hide him from the drug lords he informed on. Renaming himself Michael, he plans to run away with Foxy to a new life. All of his plans crumble, however, when Link discovers Michael’s true identity, and informs on him for a hefty sum to the devious Miss Katherine (Katheryn Loder) and the suave Stve Elias (Peter Brown). When Katherine’s goons kill Michael in Foxy’s house, Foxy swears revenge. She infiltrates a call girl ring run by Katherine in an attempt to bring the crime lord down in the name of vengeance.

Hill has created an iconic character in Foxy Brown, a character who has been copied and referenced to varying degrees of success since her inception (most shamefully in Beyonce Knowles’ character of Foxy Cleopatra in “Austin Powers in Goldmember”). It’s not difficult to see why. As embodied by Grier, Foxy is the ultimate female: beautiful, sexy, intelligent, and undeniably fierce. Grier is such a pleasure to watch on screen that you sometimes forget about the lack of support she has around her or the simplistic morals of the story.

Loder’s Miss Katherine Wall is a villainess of operatic proportions, filled with delightful malice and sadistic impulse. Brown’s Steve is just as good, every inch the handsome mid-70s man. Fargas is also memorable as the weasely and cowardly Link, but outside of these three, the supporting players are only adequate. While Junita Brown’s doomed call girl has her moments, the rest of the supporting cast is fairly flat, with line readings not having the right amount of emotion (either too much or too little) and often hitting just off-key of the psychological and emotional core that they need to strike.

While Hill’s script taps deep into the racial biases of the 70s, and is filled with the appropriate amount of slang and tension, his characters are often moral absolutes with little in shades of grey or complex motivations. Often, this exists on a similar plane to race: with the exception of Dalton/Michael’s fellow agents, every white person in the film is shown as uncaring at best, evil of the highest order at worst. By the same token, with the exception of Link and a fellow dope dealer, the black characters are heroic and upright. In the context of the film, the conceit is appropriate, but it can lead to some viewers being upset or failing to take into account the politics of the time that would lead to such a depiction and dismissing the film out of hand.

Despite these flaws, “Foxy Brown” is definitely a film to watch not just for historical value, but for the remarkable performance of Pam Grier, an actress just as strong and beautiful today as she was in 1974. Whenever she’s on the screen, you immediately forget about any imperfections in the movie. As the theme song says, she is “superbad.” And that’s good.