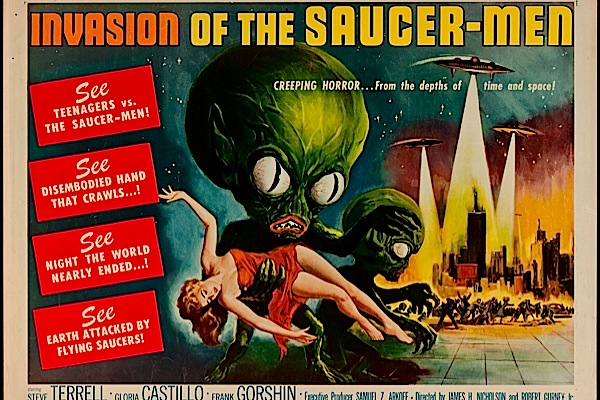 Teenagers Johnny (Steve Terrell) and Joan (Gloria Castillo) are returning from Lover’s Lane when they run over something. At first they fear they’ve ran over a human but when they get out of the car they see a little green man. They go to tell the police and other adults but no one believes them so they must gather up their friends and try to defeat the aliens.

INVASION OF THE SAUCER MEN is without question one of the better “B” science fiction movies of the 1950s. The decade offered up so many awful “B” movies that were thrown into drive-ins that it’s almost easy to forget that there were some pretty good ones made. I think most people are going to remember this film thanks in large part to the terrific posters, which proudly show off the terrific looking aliens.

As far as the film goes, I think it’s a lot better than it actually gets credit for. Most of the science fiction from this period was either dead serious, downright bad or so bad it’s campy. INVASION OF THE SAUCER MEN tried to be campy on purpose and it’s actually quite funny. The film manages to show the frustration of the teenagers because of being around adults who never believe anything they say. There’s also some humor with a local farmer and his beloved cow. And lets now forget a couple out-of-towners seeking ladies with a very funny sequence inside a café.

The comedy works just well but I also found the death scenes to be effective too. When it comes time for an alien attack director Edward L. Cahn goes 100% serious and the scenes are very effective. The performances are about what you’d expect from a film like this but the two leads at least manage to carry the film nicely. With all of that said, there’s no question that it’s the aliens that are the highlight. Their terrific large heads and bugged eyes are just downright neat to look out and they certainly add most of the fun.