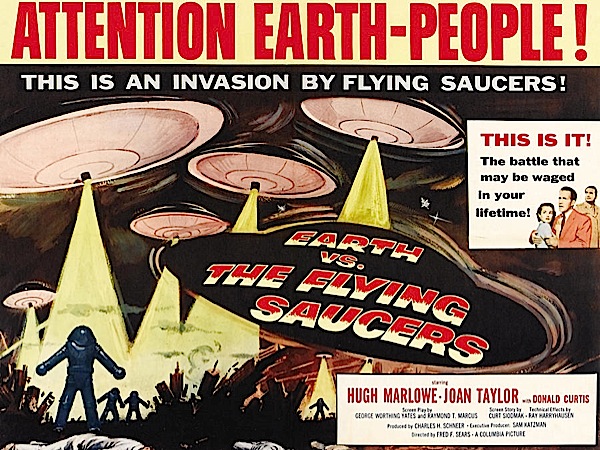 Ray Harryhausen should have received top billing in this film, since his superb stop-action animation is the real star here. None of this nonsense about wise and benevolent aliens a la “The Day the Earth Stood Still”! Here, the aliens are nasty and mean business. The mass saucer attack on Washington is a classic scene; swiped by everything from “Independence Day” to a TV commercial for a nationwide chain of fast-food restaurants. Although the saucer’s “magnetic propulsion” is scientific balderdash (Earth’s magnetic field is just about strong enough to swing a compass needle.); still it’s thrilling to see the military and the scientists racing around D.C. in 1-and-a-half ton trucks with diesel generators and “magnetic disruptor’s” mounted on the truck beds. (They look a bit like an out-sized Maxim machine gun.) When these are fired at an alien ship, it starts to wobble wildly until it falls and crashes. At one point, a saucer lands on the White House lawn in an attempt to kill or capture the President (Eisenhower) (gasp!) The aliens step out clad in silver spacesuits that act as powered exoskeletons that enable them to walk while under Earth’s gravity. Fortunately, these are magnetically powered like their ships and Hugh Marlowe (who played Patricia Neal’s lunkhead boyfriend in “The Day the Earth Stood Still”) arrives on the scene with one of those disruptor’s and drives them off.

There is an interesting scene earlier in the film where an alien is subdued and the helmet wrenched off of his suit. Before crumbling to dust in our atmosphere, you can see out-sized black eyes, no nose, and a slit-like mouth set in a light-bulb shaped head. I didn’t think this idea of an alien occurred to anybody until the 1970’s.

Despite perfunctory acting and scientific howlers, this movie is still endearing, not only for the fine special effects (CGI is a bit too slick for me.), but also for an innocence that would soon be lost. For the following year after this film was made, the Soviet Union would shock America by launching the first artificial satellite (Sputnik I) into Earth orbit using the first ICBM. This meant that the Soviets could launch a nuclear warhead at the United States. From then until the Cuban Missile Crisis persuaded both sides to back down from hair-trigger postures, fears of nuclear war would put possible interplanetary war very much in the shade.