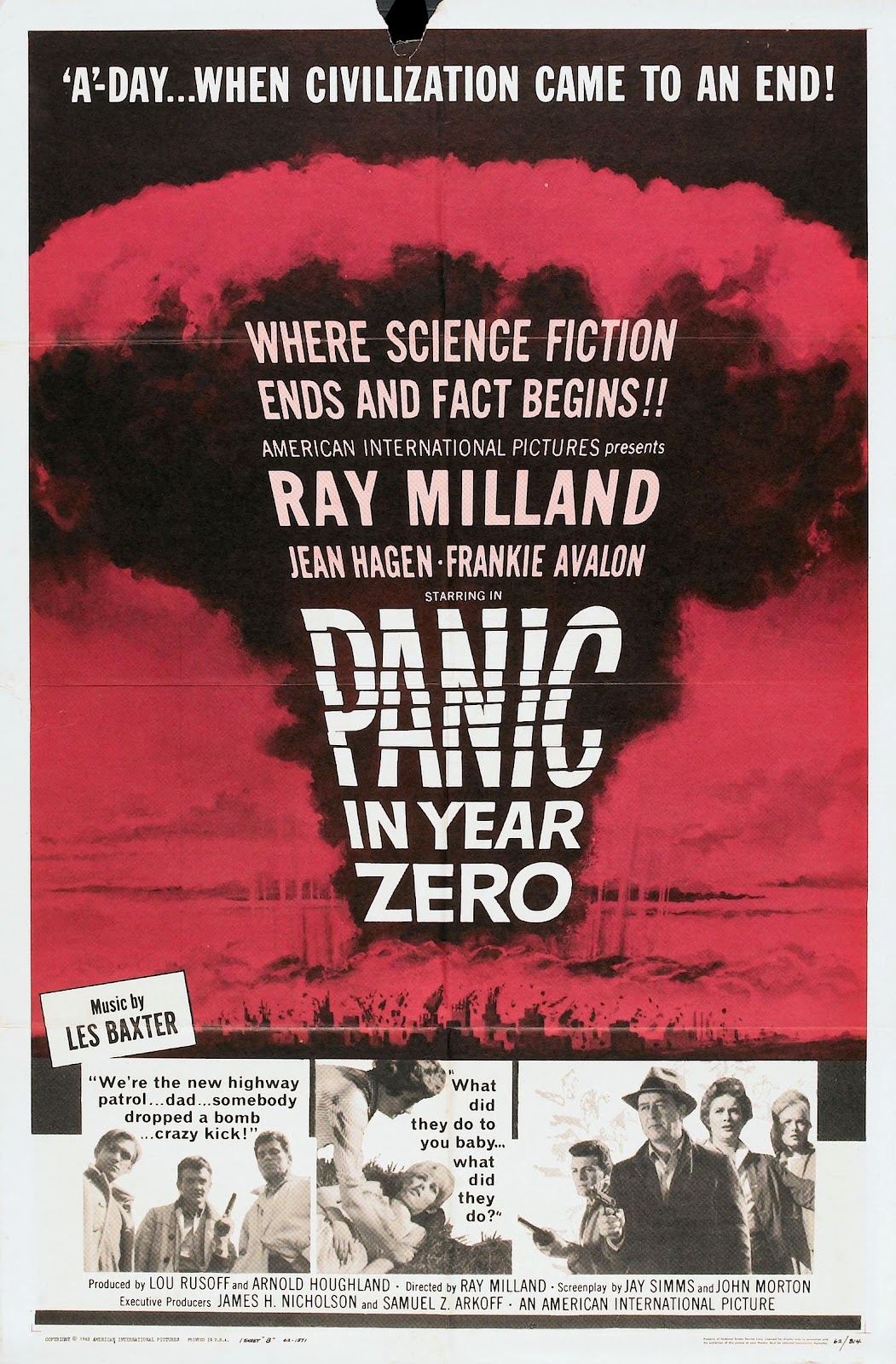 By itself, “Panic in Year Zero,” is a very good movie. The cast has some prominent actors and stars of the past, all of whom give top performances. The film has a solid plot and script, and excellent cinematography and direction (by Ray Milland himself). The black and white film helps build a sense of angst, uncertainty and concern for the characters. But what sets this film apart as somewhat exceptional, and thus worthy of being in a film library, is the time and culture that it covers. After more than a decade into the 21st century, today it’s hard to find much social consciousness, awareness or memory of that time of the Cold War that so influenced life for most of four decades. Especially in the U.S., but also around the world.

This film was set at the height of the Cold War. From the late 1940s through the 50s and into the 60s, the U.S. and Soviet Union may have been the closest to getting into an all-out nuclear war. The threat of widespread global destruction was very real — much more real than how some today refer to it as a paranoia of the past. To those pundits of paranoia, I would just point to the Cuban missile crisis of 1963.

“Panic in Year Zero” does more than tell a story and show what might happen from a nuclear disaster. It shows the dark side of human nature and how many people revert to barbarism in times of chaos when rule and order are absent. It focuses on one family and one man’s drive to save his family from the brutality and chaos that would follow nuclear blasts. It shows his struggle to keep a sense of right and morality, and to be able to judge right from wrong in such a time of upheaval. And it shows his drive to keep right and morality ever before his family members. We see the emotional and spiritual struggle of this one man as he and his family cope with the challenges to survive, and as he tries to protect them from harm and evil inherent in societal upheaval.

This film has considerable historical and social value for this portrayal and study alone. And it should be seen as no less relevant in the 21st century — where we yet have nuclear threats from other nations. But it should be a warning as well about what might happen without nuclear war, in a world where social drives are blurring the lines of morality, freedom, and human rights, and where the resulting amorality, hedonism and relativism are fast obliterating basic rights and morals of human nature and democracy.

A single flag in the film stands as a warning to society for all time. A news report heard on the radio early in the film says that leaders around the world have agreed that because of the global reach of the nuclear devastation, “this year will henceforth be known in history as Year Zero.” World War I, World War II, and all other wars, conquests and disasters of the past were always set in the time they occurred in history – in the modern calendar – the Gregorian calendar. But, mankind has reached such a state that the power and forces of man himself are so great that he can now rule and determine time in the universe. Clearly, God is removed from society and humanity itself. So, the ego of man will triumph in guiding society into a future without boundaries, morals and restraints in which it could not long survive.

Did the producers, writers and director intend this film to go much beyond a story of survival and emotional and moral struggle in the face of threats to survival? Who knows? But it should be clear to anyone who thinks about this film while watching it, that here is a morality play unfolding that has much deeper meaning and messages than of the immediate situation the film covers. Nuclear war isn’t the greatest threat to the survival of humanity today. It’s man’s own ego. Without moral guidelines, without protection of basic human rights, without respect for human life, and in a godless society, anarchy is sure to reign. Without basic human rights and respect for life, civility crumbles. It’s happened in every such case in world history. Can we, will we get the message for today? I highly recommend “Panic in Year Zero” as a movie for all to see.