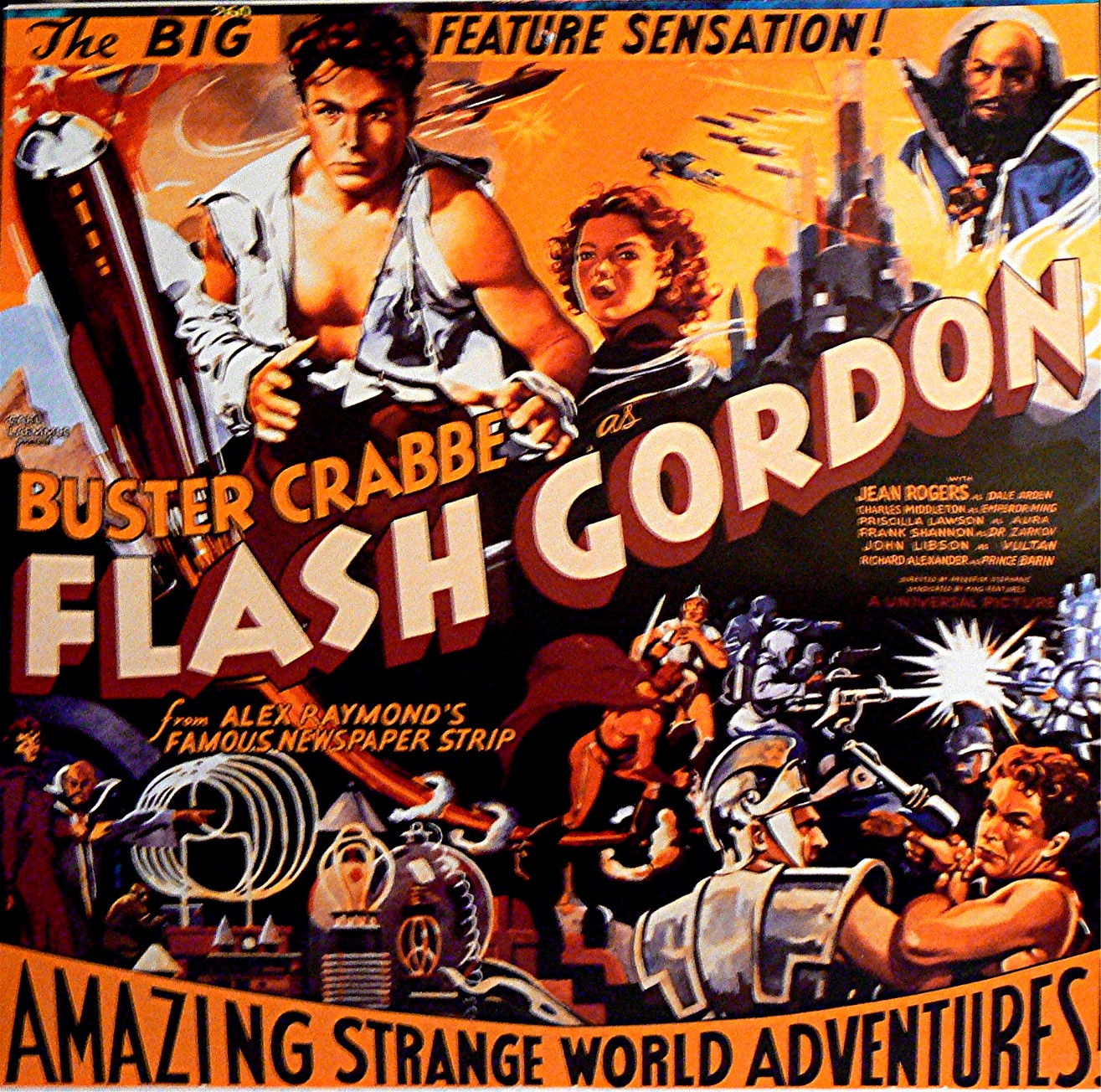 Flash Gordon has it all…..

There is really a little of everything in this serial: There are lion-men, hawk-men, shark-men, Earthmen, & I guess you’d call em Mongo-men. The sets & costumes combine, Greek, Roman, Oriental, Egyptian and there’s even armour like English knights. Awesome costumes. And some of it was a riot. Those horrible tights with shorts over em worn by Zarkov are beyond description. And the guys in the furnace scene seem to be wearing boxers.

It’s also funny the way they renamed the octopus to an octosack, the orangutan to orangapoid, and the tiger to a tigron. There’s even a dragon (a Godzilla-like creature who threatens Flash on a couple of occasions before being killed off).

You like the Invisible Man? This has got you covered. You like sword fights, wrestling (both animals & men), fist fights? Plenty for any taste. We have an underwater city, a sky city, a city on top of a mountain, and tonnes of secret passages and caves.

Hokey effects? Massive amounts. The sky city is supported by radium furnaces stoked like old-time steamships. The rocketships are “powered” by fireworks and have constant backfires and/or humming noises. Lots of wires are visible holding things up (like food when Flash was invisible and of course rocketships). There’s clouds out in space, but none around the earth when viewed from Mongo. “Giant” lizards show up briefly. Fighting sea creatures supposedly threaten Flash & co. on the way to the shark-men’s underwater city. The “gadgets” in Dr. Zarkov’s lab crack me up. And they seem to be the same ones no matter what lab he’s in (he worked in Ming’s lab and Vultan’s).

And yeah, we have romance. Everyone wants Dale; Ming, Vultan, Flash. But at least one person wanted Princess Aura (Prince Baron) just not the person she would have preferred. In fact, it seems a lot of the sub-plots concern intrigue on the part of Princess Aura to try to win Flash.

Man I think the characters are awesome. That fat, horse-laughing, King Vultan was hilarious. How he managed those wings was pure artistry. And Ming! What can I say about Ming? He was perfect. They should have had him for the emperor in Starwars. Ming has got to be my favourite character in this serial. Princess Aura was quite a little character too. And she pulled it off nicely. I think she’s a better actress than Dale Arden by a long shot. Even the sneaky high priest had a distinctive role. Zarkov was good, but not the strongest character—and he always stood in the background during fight scenes holding Dale. Now we get to Flash: Flash, of course, was the strong point, the leader, the hero—and he did it well. Crabbe is a good actor and this role fit him perfectly.

After watching this, I think I know where George Lucas got the main idea for Starwars. Watch this, you’ll see what I mean.

If you ever considered watching an old serial (or any serial for that matter), this should be your first choice. The only reason I didn’t give this one a 10 is because of a few story holes that could have been fixed easily, the way the giant lizards seemed just tacked in there, and a couple of weak characters (king of shark-men & king of lion-men).