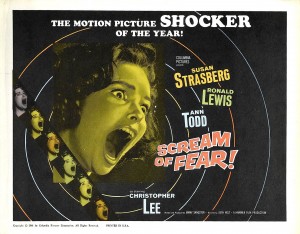 Shot in moody black & white by Holt and cinematographer Douglas Slocombe, and eerily scored by Clifton Parker, the story sees a young paralysed woman return to her family home in France to visit her father who she hasn’t seen for years; and to finally meet her new step-mother. Upon arrival she is informed that her father has had to go away on business, which becomes a problem as she starts to see his dead body, first in the summer house, then in the lounge! The mind can play tricks, especially to the traumatised, but she’s convinced that what she is seeing is real. Even the family doctor (Lee in a suitably suspicious role) thinks there are mental issues here. Undaunted she enlists the help of friendly chauffeur Bob and sets about unravelling either her mind, or the mystery that lurks at the Appleby home.

The film opens with an attention grabbing sequence as police drag a lake for a body, from there on the film becomes essentially a four character piece. Now it’s been said in some quarters that this structure telegraphs where the film is going to end up. There’s a tiny bit of truth in that but there are at least three twisty kickers here to steer this far away from charges of predictability. In fact the finale has a double whammy that is most rewarding. The whole film pulses with atmosphere and is cloaked in shadows and low tone conversations. The sound work here is also top quality, the constant jabber of the crickets gnaw away at the ears, while the swish of the nearby sea instills a calm that ultimately sets up a false sense of security. The acting is on the money too, be it Strasberg perfectly conveying a multitude of emotions from her wheelchair, or Todd doing a nice line in the “too good to be true?” wholesome step-mom routine. All parties ensure that the story is built up right and that the pay off provides maximum impact.

Christopher Lee once said that this was one of the best Hammer Horror film’s he was ever involved with, that’s a fine selling point to be sure. A different kind of Hammer Horror, one that drips with dread and thrives on its mystery elements. Taste Of Fear is highly recommended to genre fans who prefer psychological chillers over blood letting and overkilled boo jump movies